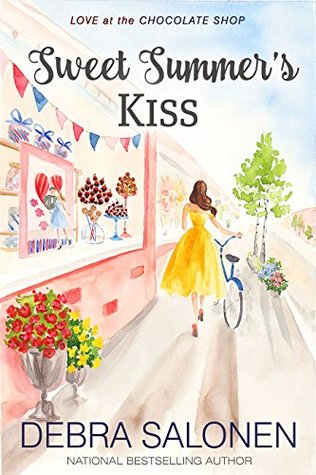 A storybook kiss on New Year’s Eve at the Big Sky Mavericks Masked Ball in Marietta, Montana should have been the beginning of a grand romance for Gretchen Zabrinski and Daniel Andrews. But when Gretchen overhears a phone call from Daniel to his brother about what he really wants from a woman, she takes off…without leaving so much as a glass slipper behind.

Daniel wants a family. Gretchen will never be able to give him that. So why does fate keep throwing them together so cruelly? First, at a Copper Mountain Chocolate Shop Speed Dating event, then when he’s hired to open a new division at her PR firm. But competing, shoulder-to-shoulder, to sell the most exotic chocolate kisses for charity really is the last straw.

Is love a cosmic connection or a karmic joke? Sometimes, the answer reveals itself in a kiss—a sweet kiss shared beneath a warm Montana summer sky.

There are times when our lives change in an instant.  Dreams, plans, desires can flip like a tumbleweed completely out of control in the whirlwind that is our reality.  It’s not right, it’s not fair… but it is life and we only get one so those plans, those dreams often have to take a turn in a different direction.  Only that’s one of the most difficult things to do.  To give up a dream.  Yet there are more than just one way for dreams to come true.  They might not happen in the way we envisioned, but dreams never really die they simply evolve to match the reality we face.  If we’re brave enough to take the risk of not finding our original dream, but accepting and embracing the dream that is right in front of us.

These are life lessons, sometimes harsh lessons, that Gretchen and Daniel must accept.  That doesn’t mean that their dreams have to fail, it only means they need to find another type of dream to make their own unique reality.

Gretchen’s night at the Big Sky Mavericks Masked Ball in Marietta, Montana was a night of living the Cinderella fairy tale, including fleeing the ball in a panic, leaving a potential Prince Charming far behind.  It was all going so well, so much fun, a charming man and the magic of the perfect night.  Right up until an overheard conversation brought everything tumbling down.  No, it was better for them both to simply leave, to stay would involve more heartache than she had the strength to endure.  Daniel had discovered that perfect woman for him.  Enough so that he did a bit of excited bragging in a conversation.  Sometimes you find that one person and you simply “know” and if you’re lucky they “know” right back at you.  Daniel believed he’d found that… right up until his dream woman disappeared.

Fate will bring Daniel and Gretchen back together for a second chance.  It’s going to be up to Daniel to prove that they could have it all.  And up to Gretchen to finally explain why that simply couldn’t be.  But there is magic in Marietta, Montana.  The kind of  magic that involves friends, family and making the dream you lost take a different turn straight to a perfect future for two fairy tale dreamers.

I adored this couple.  They each had to make changes to their life’s plan, but they endured.  Together they could have something extremely special.  All it takes is a bit of belief in each other… oh, and lots of chocolate never hurts either.  It’s always a special treat for me to run into loved characters from earlier series, and this time was no exception.  It’s going to be hard to let this series go shortly.  Hopefully these wonderful authors will pair up once again for another magical year in Marietta, Montana.

Sweet Summer’s Kiss could be read as a stand alone story – but there are some threads that, in my opinion, you’ll enjoy this story a bit more if you’ve followed the entire series.  They are an amazing set of stories surrounded by chocolate, friends, family and finding that one love that’s perfect for you.  Hard to pass that up.  It truly is no hardship to read this entire series.  I’d highly recommend this story and the entire series to any Romance reader.