Nobody Else But You by Claire Marti 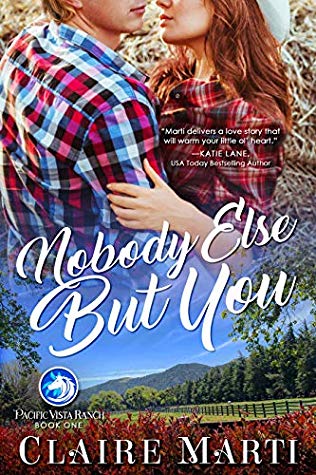 A smoking hot stuntman. A fiery horse breeder. And a 220-acre ranch too small for both of them.

When an arrogant Hollywood stuntman struts into Samantha McNeill’s breeding barn, sparks fly. She doesn’t care how mouthwateringly gorgeous he is, not when he assumes Pacific Vista Ranch’s resident horse breeding manager must be a man. Not to mention his job threatens to pull her family back into the paparazzi filled world they escaped from over a decade ago.

Now it’s at her door––wearing faded jeans and a wicked grin.

Holt Ericsson can tell the beautiful redhead hates him on sight and the feeling is becoming mutual. But he will call in a favor and convince Sam’s legendary director father that Pacific Vista Ranch is the only suitable place left in California to film an epic Western. Holt’s invested all his savings in the movie and his entire career is riding on it. No way will he allow one irritating, sexy woman to stand in his way.

Sam intends to fight him at every turn…if only her heart didn’t race when they’re together. Holt does his best to steer clear of her…except all he wants to do is hold her close. The sizzling attraction between them is either going to burn up the sheets or burn down the ranch.

END_OF_DOCUMENT_TOKEN_TO_BE_REPLACED

Claire Marti, Modern Western Romance, Nobody Else But You, Pacific Vista Ranch #1