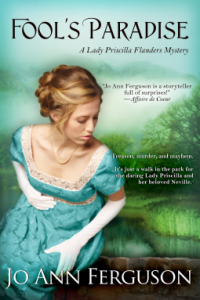 Something is rotten in the Lake District . . . and the Prince Regent has asked Lord Neville Hathaway to investigate. But in order to ensure success, he asks his wife—and intrepid partner in crime-solving—Lady Priscilla, to join him.
When they learn that a young woman of the Beau Monde has vanished in the area, they can’t help wondering if that disappearance is connected to tales of a strange new settlement being created by a half-mad lord. Drawn into the madness against their wills, Priscilla and Neville go undercover as willing citizens in Novum Arce, the utopian recreation of Roman Britain, but it quickly becomes obvious that the person behind the kidnapping and insanity may have a very real ulterior motive—one that could change the future of the war against Napoleon.
Now they have to do more than save a missing lady—they have to stop an invasion! And there’s even more at stake! Priscilla has just discovered she’s going to have a child. And Neville has to decide: just how much is he willing to sacrifice for King and country?

*I received an e-ARC of Fool’s Paradise by Jo Ann Ferguson from the publisher and NetGalley in exchange for an honest review. That does not change what I think of this novel.*

This was the first of the ongoing series “A Lady Priscilla Flanders Mystery” that I have read.  While it might have helped to have a bit more background – the opening chapters filled me in on the basics enough to dive right into the story with comfort.

Read on for my thoughts on Fool’s Paradise.  No true spoilers, promise.