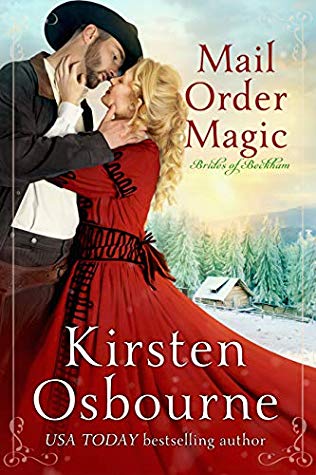 When widow Ruth Arbuckle discovers her ranch foreman is stealing from her, she decides to do something completely unorthodox—she sends for a mail-order husband. She refuses to continue losing money, and she wants someone competent to run all aspects of her ranch, including the financial side. It’s purely business, but when the man arrives to marry her, she’s stunned to find him so compelling. She has no idea what to think or feel!

Sebastian Miller toils away in a bank in Beckham, Massachusetts, wishing for the opportunity to work outdoors while occasionally playing with the numbers he’s come to love. When his sister Elizabeth comes to see him with a plan for him to go west, he jumps at the chance—it’s as if Ruth’s letter was meant just for him. He gets on a train just days later, determined to woo his wife until she falls in love with him.

Will the two of them—each looking at things from very different perspectives—be able to find love together? Or will they have the loveless marriage Ruth initially planned?

Mail Order Magic is the 31st title in the Brides of Beckham series.  A complete list of titles in this series can be found on the Kirsten Osbourne page here at KB.