Married by Midnight by Christine Sterling 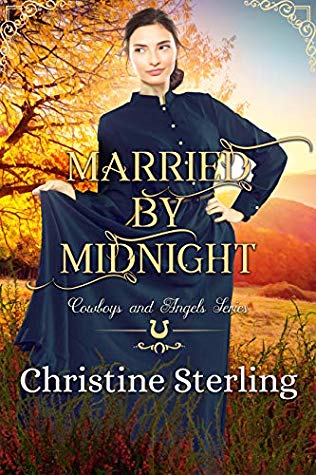 A woman fighting to keep her family’s farm. A man hiding from the guilt that consumes him. The two angels determined to show each of them the power of forgiveness.

Sarah Abrahams hears the whispers around town and knows that no man would consider marrying her. Alone after her family’s death, she is now in danger of losing the farm and the only life she has known in Creede, Colorado. The bank won’t negotiate with her unless she is married, and she knows that no man would consider marrying her without expecting something in return. What she didn’t count on was the stranger from the North East that appeared on a rainy night and how a simple kindness could be repaid in a big way.

Ian Poole has been branded a coward and is on the run from the memories that plague him. He leaves his old life behind and heads West to find healing. Injured en route, he seeks refuge at a farm. When Ian finds out Sarah needs help, can this be the opportunity to redeem himself?