The Dashing Groom by Jo Grafford 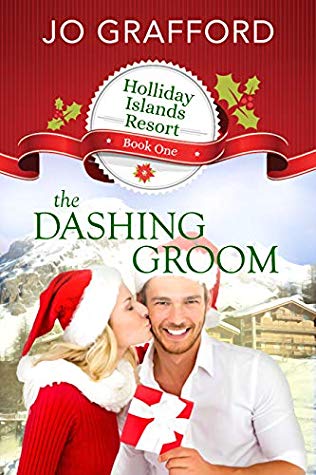 Warren “Dash” Holliday agrees to return to the Holliday Islands Resort to transform Dasher Island into a skiing wonderland for sweethearts. There’s only one catch. His billionaire father wants a celebrity endorsement for his new black diamond and trick slopes by Christmas, and that’s only a month away.

Jovie Cyrus, a championship skier, is looking for a much-needed break from the competitive circuit and the paparazzi. When an invitation arrives to spend a working vacation on a new set of slopes in Alaska — with zero media coverage until after the holidays when her endorsement goes live — she can’t resist.

But when she arrives at the luxury resort, she discovers the world’s most elusive extreme skier is already out there testing the new lanes. Determined to finally face off with the man who’s been challenging her world records from afar, she finds herself heating up the slopes with a truly extraordinary athlete — one who will test not only her strength but her heart in their race to the top!