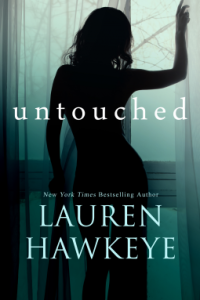 I received a copy of Untouched from NetGalley in exchange for an honest review of the novel. This does not affect my opinion of the book or the content of my review.

“Alexa Kendrick has no recollection of the car accident that left her scarred and sent her life careening wildly off course. When the half-sister she thought she’d never meet shows up at her door with an invitation to a new life, Alexa finds herself in Florence, Arizona, a town notorious for being populated with more prison inmates than actual citizens…a town that has done its best to hide its own dark secret.

After Ellie is called out of town, she leaves her sister with the keys to her flower shop and Alexa finds herself swapping lives with her sibling: running Ellie’s business, living in the house left to them both by their absentee father…and forging a smoldering relationship with sexy-as-sin penitentiary officer, Nate Fury—a man with his own demons.

But arranging flowers by day and tangling with the only man who has ever seen her real self by night isn’t enough to silence the mysterious panic that fuels Alexa’s dark dreams. When Nate brings home a book written by an inmate, one describing an unspeakable crime, the shackles binding Alexa’s own lost memories begin to shatter. And as the devastating truth comes to light, she realizes that Nate holds the key to unlocking her past, as well as her heart.”

The Review of Untouched

Alexa is ready to take her life back.  It’s been a year since the accident, and while her body had healed her memory was no closer to returning.  Sitting on a hillside ledge, looking down at the beauty and color of the landscape of Arizona below her, she wished for her paintbrushes.  A good sign since she hadn’t taken up her brushes since that night.  The night she lost so much of herself.

The need to express herself through her art was strong again.  The cell call to her agent Jia finalized her decision.  It was time, past time to move forward – to whatever life held.

Two days before her momentous decision was made, a stranger asked for her in the chain restaurant where she put in time, or hid from her mother.  Eleanor Kendrick or Ellie.  Her half-sister.  Unknown half-sister.  While the resemblance was hard to deny, even more questions popped into Alexa’s head.  Ellie explained that she had found Alexa’s birth certificate, among other things in a box in their deceased grandmother’s apartment.  It took awhile to track Alexa down but now that she had – well, Ellie just wanted her to know that she existed and that Florence, Arizona wasn’t too far away for a visit.  Ellie walked out of the diner as quickly as she had appeared.  But she left Alexa with a lot to think about.

Alexa’s mother, Tracy had her own reasons for leaving Florence years ago.  Secrets best left uncovered, best left alone.  While she doesn’t want Alexa to go there, she doesn’t stop her or tell her what she should have been told long ago.

Within an hour of arriving in Florence, Alexa found herself holding the keys to her sister’s flower shop, no clue how to make the most simplest of flower arrangements, a place to stay above the shop and the feeling of having survived a tornado.  The whirlwind that was Ellie and her husband drove off to tend to a family situation – leaving Alexa speechless.

Taking refuge in a diner across the street, Alexa sits trying to figure out what to do next.  Trouble is she’s stuck until Ellie returns.  While pondering her options she picks up a pen, pulls a paper napkin towards her and starts to sketch various people in the diner.  As she draws some of the excitement, the color filled enjoyment of drawing once more fills her.

Seated across the diner from Alexa is a man, probably a prison guard by the look of his uniform. He looks like the world is on his shoulder, as he glances up and nods in her direction Alexa is surprised by the sudden awareness, attraction even between them.  His sadness is worn like a second skin, and Alexa begins to sketch him.  Nate Fury.

Two people broken by circumstances beyond their control.  Together can they become strong, whole again?  With a mystery to solve and secrets to uncover only time will tell.

And from here, you will have to read the book.  I’ve given you enough to whet your curiosity to find out what happens next.  You won’t be disappointed.

My Opinion of Untouched

I’m not usually a big fan of the instantly fall in love within hours type of love story.  I suppose it could happen.  I’d believe lust at first sight more.  But for these two wounded souls it works.  It surprisingly does work.  Because as the story goes on they will need to hold onto each other.

The story is interspaced with Alexa’s color, seeing items, people, scenery through her color filled, color described eyes.  It gave a subtle touch of someone coming out of the darkness into the richness of the world and life once again, as though everything had been shaded and muted, now it bloomed.

While there were a few times I wanted to shake these characters into making different decisions, the story line was right for them.

Overall, I really enjoyed Untouched and am looking forward to the next novel in the series.