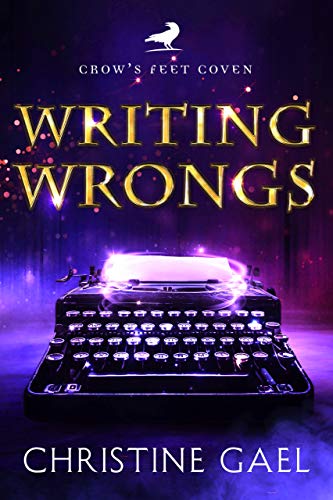 Getting divorced at 48 is hard. Almost as hard as discovering that your ancestors were part of a coven that was hunted to extinction…And you’re next.

Cricket Hawthorne’s marriage has been on life support for the past two decades, but finally pulling the plug and starting over at dang near 50 is tougher than she’d imagined. Especially when she winds up back in her hometown of Rocky Knoll living in her Mee-maw’s basement and working at her cousin’s bakery for grocery money. Not exactly the life she’d dreamed of.

Just when she wonders if she’s made a terrible mistake, she comes across an antique typewriter that gets her creative juices flowing. But when her fantastical stories become reality, she realizes her love life is the least of her problems. Something insidious is afoot in Rocky Knoll, and it’s up to her to figure out what it is, or her marriage won’t be the only thing without a heartbeat.

Titles in the Crow’s Feet Coven series include – Writing Wrongs –