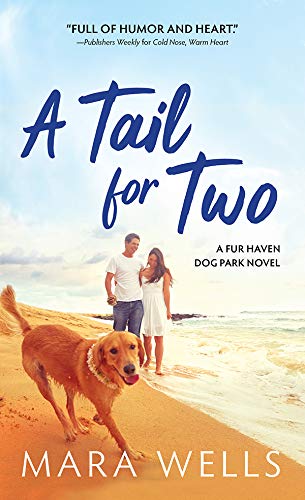 A Tail for Two is the second title in the Fur Haven Dog Park series and quite a second chance romance as well as an instant (hidden baby) fatherhood moment for Lance.

Once Carrie and Lance were married but issues developed, neither wanted to confront the other about what was now missing from their marriage and they separated to go their own ways – but not before one last night, and a pregnancy that neither expected.

Years later both have moved on in their chosen careers but neither has found that special someone to spend their lives with.  A chance encounter at a dog park will bring them back into each other’s lives… and expose a secret that Carrie kept for far too long from her former husband and Oliver’s father.

I enjoyed A Tail for Two, adored little Oliver and the pups, liked even understood Lance, but I couldn’t wrap my mind around Carrie’s inability to commit to Lance again.  Their marriage suffered from neglect, yes, but neither were abusive, neither cheated, they simply let other things become more important and didn’t do anything about it.  So, Carrie was (and continues to be) the puzzle piece in this story for me.  Being afraid of losing her son should Lance make that play might have been a reason I could understand.  But they’ve both grown up in the years in between and Lance has shown his true colors and his devotion to their son… so I guess I’ll simply have to accept that Carrie will always be a puzzle for me but that I adored and liked the men in her life.