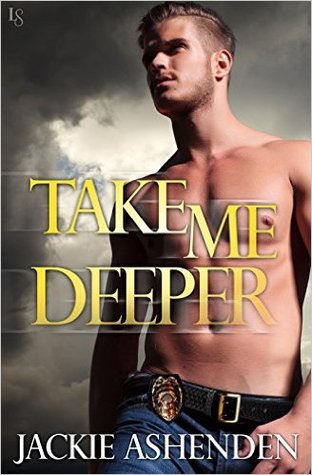 Even as a Green Beret, Zane Redmond hasn’t faced a tougher mission than going home again. Loyalty to his brothers is the only reason he’s back in Texas, not that he intends to stay for long. Zane sure as hell isn’t going into the family business. One last bounty and he’s done—or so he thinks. Nobody warned him that his fugitive happens to be a red-hot brunette with a smart mouth, a body made for sin, and a brutal cartel on her trail.

Bad circumstances and worse choices have left Iris Callahan in a desperate situation. After getting arrested for a drug drop gone wrong, she skipped bail and hit the road to avoid testifying. Now the cartel wants Iris silenced forever, and she’s just lucky that Zane catches her before they do. Handcuffed to a bed, she surrenders to the cool-as-ice bounty hunter in order to survive. But as the chase heats up, Zane sneaks past her emotional defenses—and Iris is in too deep to let him go.

Titles in this series include:  Take Me Deeper

Read on for my thoughts on Take Me Deeper.  No true spoilers, promise.

Iris isn’t your “typical” criminal.  She did something stupid for the right reasons – but she didn’t trust her instincts that told her this whole thing was shady beyond belief.  Love for a younger sister and wanting her to be safe with you will make a woman take a chance on something that she knows she should have run in the other direction over.  Now she’s in deep trouble.  On the run not only from the police, but from the cartel that wants no witnesses, live witnesses to testify against them, Iris has hit the wall of despair.  This bounty hunter might take her back to her death or he just might be her way out of trouble and into a safe life once again.

Zane has no happy, fluffy unicorn memories of his family life.  In fact, his enlistment in the Green Berets was a way out of the family situation and the family business.  Back home for the shortest intended visit in history, he has no intentions of sticking around.  His father may be history now, yet the old man’s death won’t erase the memories of his actions.  Zane loves his brothers but is not looking forward to that one last run they talked him into.  Bail jumper, runner – it should be a quick easy hunt.  Instead this one is about to change his life.

Sometimes characters grow on you and I’ve found, you have to give them that chance to do so.  Iris and Zane – I wasn’t in either’s corner when their story began.  Yet as the story developed and their personalities, their truer selves, emerged I got caught up in their journey.  They each have good reasons for their hard outer shells.  No one’s life is perfect, but these two got some extra hard knocks tossed at them.

The action takes us on some interesting twists and turns.  The banter between them is not only engaging but brings out their personalities as well.  I don’t particularly like information dumps in stories, so the details for each Zane and Iris coming out slowly throughout the story worked for me.  Others may prefer more sooner, but this time it worked well for my reading style.  The family bonds are strong here, and that tightened the drama and the emotional touch that every romance needs.

I enjoyed Take Me Deeper and will definitely be following the rest of the series.  I would recommend this one for any reader who enjoys some action and suspense with their romance.

*I received an e-ARC of Take Me Deeper from the publisher, Random House – Loveswept and NetGalley in exchange for an honest review.  That does not change what I think of this novel.*