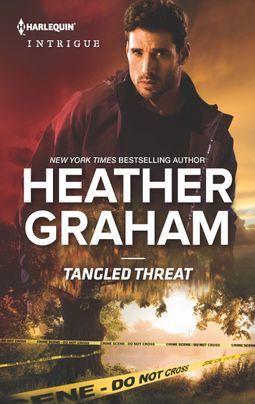 TANGLED THREAT is a quick Romantic Suspense from Heather Graham.  Once Maura and Brock had a summer thing, perhaps a future if things had gone differently.  Instead, they found a body at the infamous Hanging Tree, Brock was arrested as a person of interest, and Maura disappeared from the area and his life… until today.

Now both Brock and Maura are back in Florida each with a far different reason for being at the location of several missing person cases and that same Hanging Tree.  Brock is there investigating the disappearances and it is with irony who has called him in on this case.  Maura is there producing a video about the legend of the Hanging Tree for a client.  Neither expected to see the other again, but the feelings of 12 summers ago haven’t died.  Yet first, there is a mystery to solve, murder to prevent and cases to close.

I enjoyed my time in TANGLED THREAT.  Since I’ve been reading Heather Graham’s work since almost her beginning I’ve got a pretty good idea of what to expect given the length of a story.  And I was not disappointed or surprised by this story.  We have several suspects, a few red herrings, a rekindled love and an evil to stop.  To say any more would give away spoilers – so you’ll have to dive into this Romantic Suspense tale to discover the details for yourself.

I’d not hesitate to recommend TANGLED THREAT to any reader who loves a good mystery with a touch of romance – or is simply a fan of Heather Graham’s work.  There is a hint of a possibility of a connection with another of Ms. Graham’s series.  I could not officially confirm that it’s only by recognizing certain things that I got to wondering — we’ll see if anything develops along that line.