One of the fun parts of taking part in blog hops (aside from getting to visit new to me blogs) is finding great ways to interact with other book lovers.  This is one:

Teaser Tuesdays is a weekly bookish meme, hosted by MizB of Should Be Reading.

Anyone can play along! Just do the following:

• Grab your current read
• Open to a random page
• Share two (2) “teaser” sentences from somewhere on that page
• BE CAREFUL NOT TO INCLUDE SPOILERS! (make sure that what you share doesn’t give too much away! You don’t want to ruin the book for others!)
• Share the title & author, too, so that other TT participants can add the book to their TBR Lists if they like your teasers!

And then he frowned , because there was no pulsing warmth oozing now. No sticky residue on his skin. His fingers probed, and then he bowed his head, staring at his bared chest. His clean bared chest.

No blood . No wound. He blinked, pressing both hands to his chest now, moving them, pressing again, searching for the bullet hole. It had seemed gaping before. Maybe it was just smaller than it seemed.

“There’s nothing there, Duncan ,” Arianna said. “You died. Right there on the floor. We cleaned you up, and put you on the couch. In less than an hour the wound healed and you revivified . You’re alive now, and there’s no hole in your chest because you’re immortal.”

He gaped at her, then stared up at Raven. “I know it’s shocking the first time,” she whispered. “I know how difficult this is for you to believe. But, Duncan, we didn’t mean to. Arianna was aiming at me–”

“Oh, but this is so much better. Really drives the point home.”

This is the novel the tease is from: 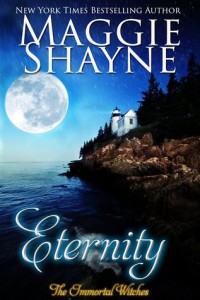 Three hundred years ago, Raven St. James was accused of witchcraft… Only one man tried to free her from the hangman’s noose–Duncan, the town minister, who died trying to save her. Three hundred years later, the accused witch still lives and longs for her love… At last, after centuries of loneliness, Raven has found her precious Duncan. But as he awakens to the passion of his past life, so too does the evil that tore them apart. Now Raven and Duncan must prove their love for all eternity…