One of the fun parts of taking part in blog hops (aside from getting to visit new to me blogs) is finding great ways to interact with other book lovers.  This is one:

Teaser Tuesdays is a weekly bookish meme, hosted by MizB of A Daily Rhythm.

Anyone can play along! Just do the following:

• Grab your current read
• Open to a random page
• Share two (2) “teaser” sentences from somewhere on that page
• BE CAREFUL NOT TO INCLUDE SPOILERS! (make sure that what you share doesn’t give too much away! You don’t want to ruin the book for others!)
• Share the title & author, too, so that other TT participants can add the book to their TBR Lists if they like your teasers!

He wanted to call out–to stop them–but he could not.

Somewhere in the deep recesses of his mind he knew how to speak.  He even had a vague recollection of the sound of his voice.  He knew what it was to scream, even the joyful release when he did it.  But the word to describe this?  Even though he could sometimes think it, his mouth refused to curve around the word.  For years, his survival had depended on muteness.  Now, he could not seem to make his mouth remember how to form syllables, words, coherent sounds. 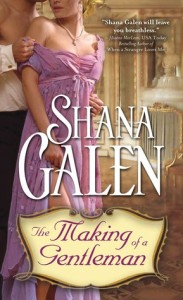 Armand, Comte de Valère has lost the ability to interact with polite society, until his family hires him a beautiful tutor, and he starts to come alive again.

Felicity Bennett vows she’ll do whatever it takes to help Armand fight back the demons that have held him captive for so long.

With Felicity’s help, Armand begins to heal, until a buried secret threatens to destroy their growing passion. ~ The Making of a Gentleman by Shana Galen.

What are you reading?

« Getting Updated on All The Challenges
Review: In Bed With The Bachelor by Megan Crane »