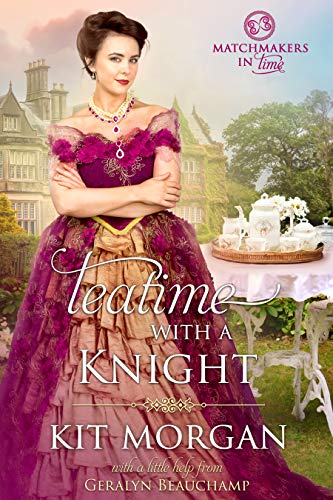 I had such a blast with ‘Teatime with a Knight‘, and if you’ve enjoyed any of Geralyn Beauchamp’s ‘Time Master‘ series, or Kit Morgan’s ‘Prairie Brides‘ and the subsequent spin-off series then you are in for a delightful treat in this one.  We are invited along on one of Dallan’s and Shona’s assignments of protecting the linage of future Time Masters by ensuring that the right people meet, fall in love, and marry with eventual children – all the while being in danger from some nasty villains who want nothing more than to wipe out of existence any trace of the Time Masters.  We’ll also get to catch up with Duncan and Cozette, the Duke, and Duchess of Stantham who are also time travelers.

Tory is really at the end of her rope.  Dead-end job, a worthless brother who won’t find a job or even pretend to be or act like an adult, and no change in sight until Tory applies for a specific tutoring job… one that will change her life as she knows it forever.  She’s about to meet the man she could love for a lifetime — in another century.  She’s just not aware of moving from modern-day back in time to Victorian-era England through a bit of side-stepping information and never leaving the estate.  Tory is just convinced that everyone around her is cosplaying, a bit weird, but to each their own.

She’ll be befriended by Aldrich, a Knight who is friends with Duncan and Cozette.  Soon that beginning friendship changes as each begins to feel the tug of their hearts (and their DNA) that quickly turns to an attraction that neither expected.  Neither knows that they are being set up to meet.  And life for this couple is about to get very interesting, even unbelievable at times.

I had fun, I enjoyed myself and I’m about to go download the next title in this series.  If you love a good Time Slip Romance or if you’ve enjoyed one of the other series and haven’t yet discovered one of them then the ‘Matchmakers in Time‘ series is perfect for you.