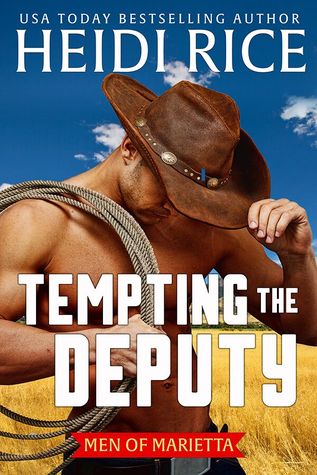 Tough, taciturn and wounded in ways that no one else knows about, Marietta rancher and part-time Deputy Sheriff Logan Tate is a man in total control of his life. Until he catches British photographer Charlotte Foster hitchhiking and ‘insists’ she gets a ride into town in his squad car…

After her run-in with Deputy Hardass, Charlie Foster is ready to ride her thumb right back out of Marietta the very next day. But that night, a trip to Grey’s Saloon fires up her imagination – and her wild side – when she overhears the town’s first responders panicking over how to come up with the money needed to repair Harry’s House in just 90 days.

Charlie has an ingenious solution to their problem, that might just require her to photograph twelve smokin’ hot guys naked. And, as luck would have it, also involves getting some much needed payback on Deputy Hardass–who isn’t too enthusiastic about participating in the calendar shoot.

But as he spends more time with Charlie, Logan can’t ignore the chemistry sizzling between them. Can a man who lives by the rules fall in love with a woman who breaks all of his?

Tempting The Deputy starts off the Men of Marietta series in such a poignant, heart-wrenching way.  The opening scene was enough to get my eyes burning, and I’d barely brushed the surface of the emotions I’d encounter while reading Logan and Charlie’s story.  Two wounded souls, neither one the exact image they project to the world, both hiding hurts that go deep into that part of a person that either brings out a survivor or destroys completely.  It took mere moments for these two to get my emotions engaged.

While Charlie believed Logan’s reactions earlier were over the top and downright rude, she wasn’t above eavesdropping on the conversation of several handsome, rugged men about a project for Harry’s House.  Somewhat revived by good food and cold brews, she had the perfect idea to help these guys and if along the way she totally got payback on one bullheaded deputy, then all the better.  Very quickly that perfect revenge got sidelined with ideas on how to help get the funding needed to get Harry’s House up and running before the deadline.  Soon she had a good feel for the kind of man this fallen first responder was, and even more for how far these men and their community were willing to go to see this long lasting way of honoring Harry and help the youth of the community become a reality.  While payback was admittedly still a part of her plan, it wasn’t the only emotion driving her to give them her best.

There are, unfortunately, many kinds of abuse.  No matter how horrific they sound, they all leave scars both visible and unseen.  Logan and Charlie have scars, deep scars that no child, no adult should have to live with  But also unfortunately, life isn’t always fair so we deal with the cards we’re dealt.  How this couple dealt with their pasts is totally opposite.  How they open up and reveal those hidden scars is proof of how much they instinctively trust each other, even if they aren’t ready to call it love.  My heart broke for the kids Charlie and Logan were.  The adults they became are exactly what each other needs now.  There is no explaining attraction, or love – it simply hits when it pleases for no logical reason.  I’m unreasonably glad that it hit for these two who deserve to be loved exactly as they are, and to heal from their pasts.

Tempting The Deputy is an emotional story full of smokin’ hot sizzling chemistry, two stubborn people, one good cause and the chance for the past to become exactly that… in the past, while a future lies ahead for two deserving people.  Full of intriguing secondary characters who soon will have their own stories told, this is a series that you’ll want to get in on from the beginning.  Because it’s gonna be a heck of a ride.  I’d recommend this one for any Romance reader who loves a good story, compelling characters and a small town unlike any other.