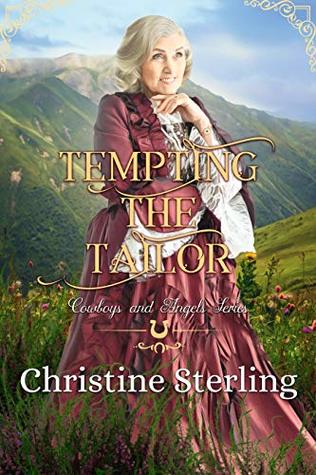 We’ve met the Stockton family in Cassie’s story and in her brother Charlie’s story.   In the background has been their loving father, Hal.  Now this gentleman will have a visit from one very special angel, and Frances will receive a visit from that angel’s wife for these angels are the Pennyworths and to me, they are very special angels indeed.  Both Frances and Hal have loved, married, and lost the loves of their lives when death took them – yet, love knows no age limits and these two will get a special matchmaking push from two angels who know what true love is.

TEMPTING THE TAILOR is a sweet, enjoyable romance of two people who believed, mistakenly, that their chance for love has come and gone.  The earlier part of this story is a recapping of Cassie and Hal arriving in Creede, and also a bit of Charlie’s arrival as well.  It’s necessary if you haven’t read the earlier stories, and a reminder of who characters are in such a long series is never unnecessary.  There is a bit of a mystery here, and the resolution of that part of the story was well played with a few surprises for the reader and a character as well.  Hal’s foolish pride will get in his way until a gentle push from his guardian angel gets his attention.  It’s always fun for me to run into the residents of Creede, CO and this time was no different.  I loved stepping back into this world once again and would definitely recommend this story or the entire series to any reader who loves a good story, interesting characters, and an angel’s touch.