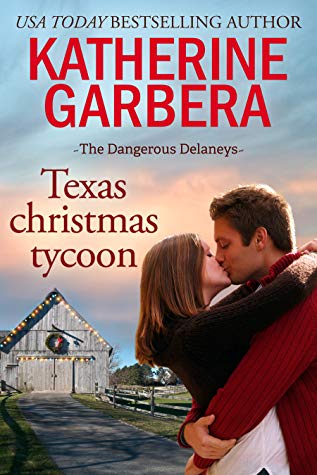 It’s going to be a difficult Christmas season in Last Stand, Texas this year.  The accident that affected so many families, friends, or simply general acquaintances is a long road to travel – and the first Christmas, the first of everything after losing a loved one is the most difficult of all.  The Delaney family lost their beloved sister and her husband in that accident leaving behind grieving brothers and one little boy who has had his foundation ripped from under him.  It’s for Lane’s sake that the brothers returned, and it’s also for Lane that they will do their best to make this Christmas memorable and, if not as perfect as it could be then at least a celebration of what matters most – love.

Of all the brothers, Braden seemed to be hit the hardest this holiday season for not only is Rose gone but it’s the time of year when his mother died and his father changed into a tyrant no one could love.  A man Braden believes mistakenly that he takes after in so many ways, and in order to protect a “future” woman, he’ll simply not commit to anyone so as not to destroy a woman’s love with his bad luck attitude.  It doesn’t have to make sense to anyone else, that Braden believes that hogwash is enough to keep him focused as the town player and a man who will always be alone.  That doesn’t mean he doesn’t have a dream, a possibility, an if-only woman who he could stand by but there’s no way she’ll ever take a chance on him.

TEXAS CHRISTMAS TYCOON is such an emotional, bittersweet romance – and for good reason.  Lea and Braden both are afraid of commitment, leary of anyone truly being willing to stick by their side no matter what.  So one flirts, the other avoids.  Trouble is, that’s not going to work between them because that spark is very real and if they don’t both put aside their past conceptions and learn a lesson they will miss the best thing possible – a love to last a lifetime, no matter what may come along.

This story is also very realistic in expressing, dealing with and learning to live with grief.  There are no magic cures, and for that my respect for Ms. Garbera rises a bit higher because there could have been far easier fixes for this couple.  Reality is that death happens.  How we deal, how we cope, how we survive is different for every single person, but differences or not we all still grieve, we hurt, we remember, we wish – and Braden will experience all of that before coming out on the other side stronger, a bit wiser, and a lot more settled within himself.

This review has gone on longer than I intended because I feel very strongly about allowing people to experience grief in their own ways for it’s a very personal emotion.  We all must deal, but there is no right or wrong way to go through that process, only our own way.  Of this entire series, even this particular line, I would call TEXAS CHRISTMAS TYCOON a must-read story for any reader who has followed along from the beginning.  (it may get confusing if you have picked up this one on its own because of the large cast, but the previous stories are so well worth going back for, IMO)  I loved Braden and Lea’s story and would not hesitate to recommend it to any reader who loves a realist look at life, death, and love with all of the complications, tears, and joys involved.

« Born to Be a Cowboy by R. C. Ryan
The Cost of Honor by Diana Muñoz Stewart »