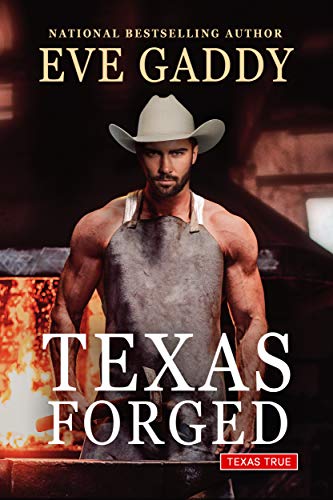 Texas Forged begins the Texas True series with a couple full of sizzling chemistry, the majority of one’s adult life half in love, and the other has been burned so badly by so-called love that she’s holding her heart and emotions in so tight that it’s a miracle they ever escaped.

When Chantel returned to Whiskey River she wasn’t expecting anything more than the chance to regroup, relax a bit before she headed into her future.  She would have laughed in fate’s face if she’d known that all the time her future had been right here in a town she left years ago, held safe with a man she believed had no interest in her.  (Well, she was dating his best friend at the time so Gabe couldn’t exactly show his happiness to be around her, right?)  Although Chantel had approached Gabe with a matchmaking scheme in mind, it didn’t take long to realize that he could be perfect for her… but she was too scared of her past romantic failures to easily take that chance.

Gabe has been in love with Chantel since high school.  That she chose his best friend over him back then still smarts a bit, but this is today and while he has no interest in her matchmaking attempts – he definitely is interested in getting to know this adult Chantel and showing her exactly how he feels about her.  But Gabe has his work cut out for him and he’s going to need all the patience he’s famous for to try to get beyond this woman’s barriers around her heart.  Passion, yes that’s the easy part, but true love will take some time.  Gabe has nothing but time when it comes to the woman he wants as his life partner.  When an unexpected surprise comes their way, when heartache might steal away what is beginning to grow between them, Gabe and Chantel have some hard choices to make.

I adored Gabe.  It’s that simple.  He’s the perfectly handsome, sexy, sometimes silent cowboy/artist that hits all the checkmarks for my chosen heroes.  I want to use the word ‘understated’ because while there is never a doubt that Gabe loves and wants Chantel his approach, his actions are comforting while sexy, safe with a bit of an edge, and always aware that if he doesn’t tread somewhat softly then Chantel will bolt and he’ll lose his love again.  So, yeah, his way of winning his lady is somewhat understated but effective.  Chantel truly believes that she’s rotten in the love department and is not willing to risk her heart again.  Yet, there is something about Gabe beyond the sexiest man she’s ever encountered, that pulls at her, draws her into taking that chance on letting her guard down.

There were moments when I laughed out loud, times when tears fell, and throughout Texas Forged the feeling of rightness about this couple never left.  What an amazing story to begin this series with!  Although this author has always been able to break my heart and heal it back again through her stories.  If you need a true love, sexy, believable romance in your life right now then pick up the beginning of the Texas True series right now and indulge yourself in some feel-good moments with Gabe and Chantel.