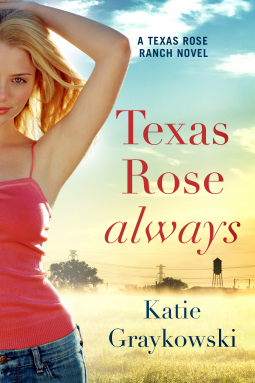 Justus Jacobi loves three things: her seven-year-old son, landscape design, and the man she sees only once a year. For the past twelve years, they’ve spent a surreal week together, but Justus has never considered their relationship anything but a dream—especially since they’ve never exchanged their real names. But when Justus comes to the Texas Rose Ranch to work, fantasy becomes reality fast…

Houston “Rowdy” Rose is an award-winning vintner, the second son in the Texas Rose Ranch dynasty…and the keeper of a secret that, if discovered, would make him an outsider in his own family. If they knew where he went the first week of every September, it would throw into question his reputation—reserved, cautious—revealing an unbridled artistic side he’d rather keep hidden.

But that side of Rowdy is all Justus knows—until now. As they rekindle their passionate relationship in the real world, they learn what their lives look like outside of a once-a-year romance—and whether love can survive a reality check.

Titles in this series include:  Texas Rose Forever – Texas Rose Always (so far)

Rowdy Rose is the second eldest of the Rose brothers.  He has the magic touch in producing well received wine and now is about to take his creations to the next level.  Coming from a ranching family, Rowdy has never felt like he quite fit in, he’s more artist than rancher and his wine making was at first seen as a hobby by his family, until it started to bring in high praises in the wine world.  No one in his family knows of his other talent, his beautiful art that could grace the walls of the highest end clients or museums.  No, those he keeps for himself and shares them with only one other person in the world.  The woman he loves, the woman he shares one week each year with at the Burning Man Festival.  There they only know each other as Houston and Daisy – their love is true, but Houston doesn’t see commitment in their future or children.  No, children are a deal breaker for him.  What they have is perfect, and if he might want more well, he pushes that aside until the next meeting with Daisy when his world is once again right.  Until this year, when he’s ready to finally make that commitment, to say I love you and follow it up with a question that he hopes she’ll say yes to… but this year there was no Daisy at Burning Man.

As Justice is heading down the dusty driveway with her young son at her side, she can’t help but think of where she would usually be this time of year.  At Burning Man with Houston.  No, she made the right choice to stop going.  Children were a deal breaker for the man she loved, and looking at this precious child beside her she couldn’t understand why..  She’d continued to meet him year after year, long after Hugh was a baby, long after she might hove told him about their child… but it was better this way.  This job would secure their future financially and she was looking forward to getting started on Mrs. Rose’s birthday present of landscaping for her beautiful home from her sons.  Really, it all will turn out for the best, and if she tells herself that often enough maybe eventually she’ll start to believe it.

Justus had no idea that she had introduced her son to his grandparents, his uncles and soon to be aunt, who happened to be her best friend.  Not until she heard his voice, turned and saw not her Houston but a man in an expensive three piece business suit with not a cowboy boot in sight.  The irony hit her straight in the heart, the good natured joking about the missing brother and how he disappeared each year for a week.  She’d told them where he probably went since she usually went to Burning Man the first week of September as well.  How could she have known that while she was avoiding him, she was right here waiting for him at his home.

I am loving the Texas Rose Ranch series.  The characters are so well drawn that they leap off the page as fully functional people with such personalities you’ll think they are your best friends.  I admit that I am now always watching and waiting for the next brother’s story, knowing that I’ll not only have a fantastic romance in store but will get to have a visit with old friends as well.

Rowdy and Justus are two people who know and love each other, but they know only a small part of their lives away from that one week each year.  I never doubted that their love was real, if unrealistic should they ever meet.  When you only show one side to the person you love, you are denying them and yourself the chance to love the whole person.  Rowdy still isn’t totally on-board with the whole father thing, he is so set in his ways, so determined to hide his real self from his family that he cannot see one beautiful tree for the huge forest surrounding it.  So, of course, he puts his foot firmly in his mouth almost constantly.  He’s angry, yet his love is still strong – and he is so confused.  On the surface Justus seems to be taking all this in stride, but she’s a mom and well versed in keeping the mom face in place when she has too.  She’ll hope for a good solution to all this, but she won’t keep her hopes up very high.  When Justus has a serious accident, true colors come out very clearly.  It’s obvious that Rowdy wants her and their son to be part of his life but he has no clue how to act.  Going with his instincts he creates a home for Hugh and Justus while she heals and plans to convince her to give them another chance.  Watching them redefine their roles, their love for each other and accept what is reality not just one week of the year was truly a wonderful experience.

I enjoyed this couple and their romance very  much and would recommend this story for any reader who enjoys a good, solid romance full of bantering, humor and believable characters.  I loved it and cannot wait for the next one to arrive.