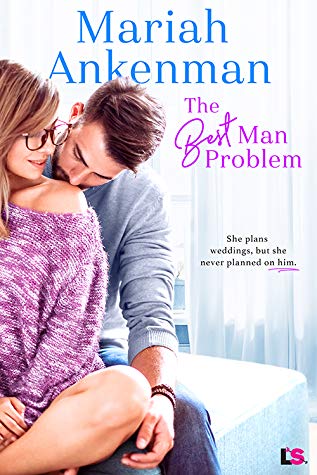 Lilly Walsh is used to keeping things buttoned-up and aboveboard. After all, the last time she hooked up with someone in a wedding party, it nearly cost her her wedding planning business. Thankfully, those rules don’t apply when she meets a handsome stranger in a hotel bar. One bad pirate joke leads to the best night of her life, but come morning, she’s got a wedding to plan.

Lincoln Reid never imagined he’d see the woman who rocked his world last night and then ran out on him ever again. But there she is, planning his best friend’s wedding with the same passion and drive that brought him to his knees. She’s adamant that wedding planner and best man can never mix, but that just means he’s got four weeks to make her see him as more than just a one-night guy. Because he’s itching for more than one night…or five, or ten…

I had fun with Lilly and Lincoln in The Best Man Problem, the second story in the Mile High Happiness series.  While I hadn’t read the first story in this series (something I plan to fix soon) I didn’t find myself lost in the least as what I felt I needed to know from the previous story was addressed in the dialogue between the characters.

On the surface, Lilly and Lincoln had one night of passion and that should have been it – but Lady Karma knows when to hit low at times and Lilly isn’t exactly thrilled to discover that Lincoln is the best man for the wedding she is currently planning and friends with both the bride and the groom.  Talk about awkward.  She has a strict, no negotiations rule of no involvement with anyone, particularly the best man, in a wedding she’s working.  She’s learned the hard way from a past mistake and she’s not about to go down that road again.  Lincoln isn’t exactly looking for a long term relationship, but he’d certainly like to break down that rule of Lilly’s.

They both have baggage, issues and still, the attraction is strong between them.  What neither was expecting is for that attraction to begin to grow into something more, something worth fighting to keep – if they are willing to take the risks involved.

I liked them both although I thought Lilly was holding onto that past mistake a bit too tightly.  It’s done and cannot be undone so move on… but that wasn’t my call to make.  The banter between them is lively, the emotions there and getting deeper, and the secondary characters made their story believable, even relatable.  A strong draw of this story is the deep connections Lilly has with her friends.  It’s as much a girl’s tribe story as it is a romance, and I enjoyed both aspects of The Best Man Problem.  If you’re in the mood for a good love story with likable characters, a few surprises, and a couple you’ll be rooting for to find their own happy ever after then you’ll want to pick up this one soon.

A Case For The Winemaker by Candace Havens

A Case For The Winemaker by Candace Havens