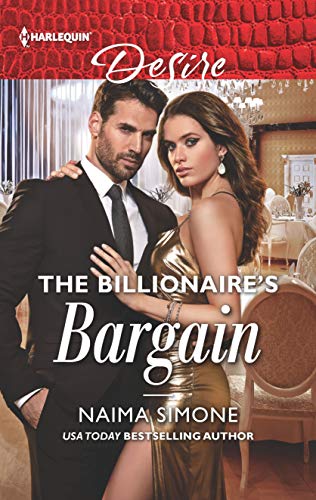 The Billionaire’s Bargain which begins the Blackout Billionaires series is breathtaking, emotional, heartbreaking – and that is just within the first chapter let alone the rest of the book.  At the beginning of the year, I had made the decision to do more Harlequin reviews, to ramp up my reading of Harlequin authors that I was not familiar with and step outside of the zone of always clicking on authors I know and love.  I’ve had mostly great success and have discovered so many authors who, thankfully, have a decent-sized backlist that I can get lost in.  My reading purely for pleasure has to be fit in around NetGalley ARCs and real-life (which often gets in the way of the fun stuff) but I’m working my way through purchases from the beginning of the year.  The Billionaire’s Bargain was one of those purchases, in fact, I’ve purchased the series up to this point so I could binge-read and now I’m really glad that I did that.

Isobel and Darius have a past, one filled with hatred on his side since he firmly believed she was a gold-digging slut who trapped his best friend into marriage.  After all, he had proof, his friend’s words laid it all out for him and their family, and even after Gage’s death in a car accident when Isobel had disappeared from his circle of friends he would never change his mind about her.  Or so he thought.  The real truth is about to change that.

Talk about an enemy to lovers trope – wow, just wow.  I’m not about to spoil anything for readers but this story is on fire, sensuous, sexy on one hand and heartbreakingly filled with justified anger, and non-justified anger as well.  My heart broke for what Isobel went through, was still going through in her time with Darius from her former husband’s family.  And I will say this – I was so furious with one character at the ending reveal that I shut off my Kindle and walked away for a few minutes.  So angry on a character’s behalf – if that doesn’t scream realism portrayed I do not know what does.

I enjoyed The Billionaire’s Bargain so much that I’m very glad I can do some binge-reading right now.  If you love a solid, well-written, believable love story then you need to pick this one up right now.  So many emotions, such a good time, I’d not hesitate to recommend this story to any Romance reader.

Available in paperback and for e-readers (mine is the Kindle)