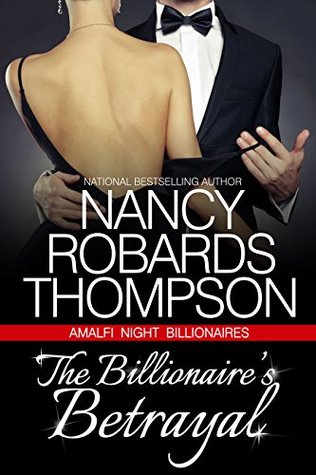 As heir of Dei Fiori Enterprises, Matteo De Luca‘s single focus after his father’s untimely death is rebuilding his family legacy and hotel empire. After two years, he’s close to achieving his goal, but there’s one person standing in his way… A sexy distraction he’d never anticipated.

Two years after her beloved husband’s death, Helena Von Lienz knows it’s finally time to let go. With her share of a hotel business, Helena heads to the Amalfi Coast in search of closure, and a portrait created for her by her late husband. What she doesn’t anticipate to discover during those hot Amalfi nights are some unexpected truths about her late hubby, and a strong sensual shared desire with Matteo, the sexy and ambitious CEO of Dei Fiori…

Read on for my thoughts on The Billionaire’s Betrayal.  No true spoilers, promise.

The Billionaire’s Betrayal is a fast paced, enjoyable romance.  When Helena’s husband was killed in the same accident that also took the life of Matteo’s father her life changed forever.   Helena has questions and guilt.  There were two women with the gentlemen when the car went off the road.   She and her husband had a fight before he stormed out the door that night.  Yes, a lot of questions, guilt and “what ifs” are spinning around in Helena’s head.

Matteo is doing everything possible to put his family’s business back together after his father’s death.  To say his father had messed up badly would be an understatement, but he would take his business to the top again.  Now, in order to have all of the shares of their holdings back under their control… Matteo has to reclaim a small amount that Helena holds.  Matteo has been trying to buy them back from her, but she is deep in grief and is not returning his calls.

Helena is ready to move on with her life.  She has one person to talk to about her husband’s actions the night he died.  No matter what the outcome of that conversation, she is ready to take back her life.  Matteo is in town for the purchase of a hotel to add to the family business, discovering that Helena is also in town he sets out to see her and work to get those shares back.  Neither one expected passion or love to explode around them.

Matteo and Helena’s romance is fast, hot and satisfying.  In a charming story, we learn quickly of Matteo’s past attraction to Helena, which he never acted upon.  Now the attraction is there on both sides and the path is clear to see where those feelings may travel.  There is a thread woven through this story of jewel thieves which most likely will be taken up in the continuation of the series.  It does add a touch of danger for Matteo and Helena.

The Billionaire’s Betrayal was a fun, entertaining and enjoyable addition to the Amalfi Night Billionaires series.  I would recommend this title for anyone who enjoys romance, another chance at a love of a lifetime or simply a very good love story.

*I received an e-ARC of The Billionaire’s Betrayal from the publisher and NetGalley in exchange for an honest review. That does not change what I think of this novel.*

Her Secret Protector by Roxanne Snopek

Her Secret Protector by Roxanne Snopek