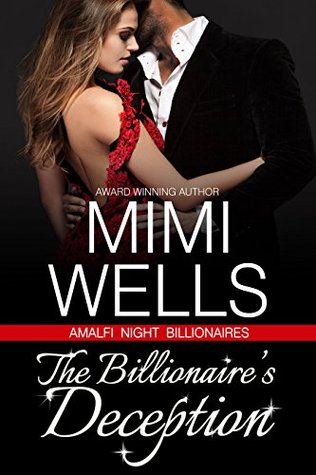 After quitting her first “real” job, Janine Pike takes off for Europe, saving an excursion to the famed Isola del Sole for last. But when her travel-mates sail off with her backpack, phone, and passport after a night of partying, she’s left only with the euros in her pocket and the faint hope that her estranged half-sister, who works at the renowned Hotel Dei Fiori Isola del Sole, might help her.

Shel Myerson, amateur racecar driver and wildly successful TV mogul, oozes wealth and prestige. What he doesn’t have much of is privacy, thanks to a recent and ugly public breakup. What he doesn’t expect is to be mistaken as an employee by a very pretty—and very broke—Janine, the one person in Europe who also doesn’t have any idea who he is.

Shel and Janine discover their chemistry is combustible—but will their budding relationship survive the heat once the press catches on?

Read on for my thoughts on The Billionaire’s Deception.  No true spoilers, promise.

Janine awakens on the beach to discover that she’s hungover, the friends she’s been traveling with have left her stranded with all of her belongings in her travel backpack on the boat with them – and that she’s responsible for a huge bar bill from the night before.  Not the way most people wake up on this beautiful island.  Embarrassed, disgruntled and scared she follows the irritating man who woke her up back to the Hotel Dei Fiori Isola del Sole.  Knowing that her half-sister, Stephanie worked at this hotel, Janine had planned to end her European trip here, just not in this fashion.  Her only hope was to use her sister’s name and hope that she will rescue Janine from this embarrassment.  Only to discover that her sister is away on business.

Shel had been casually playing the piano in the nearby bar, curiously watching the drama with the lovely American unfold in front of him.  When she mentioned Steffi’s name, he called his friend and Steffi fiance to let them know that her sister was at the hotel.  Steffi insisted that Janine remain there in her apartment until they could return.

When Janine doesn’t recognize Shel, he sees a chance to help a beautiful woman, spend some time with her hopefully without all the drama that he usually unwittingly encounters.  It was perhaps a lie with the best of intentions, but it is a lie that will bite him on the butt when he least expects it.

The Billionaire’s Deception is a charming, lighthearted, fast paced joy of a story.  I understood Shel’s deception.  Lying always comes back at you, but there are times when that white lie can smooth things over – except when hearts become involved.  He never expected Janine to be his “one”, and he’d truly simply wanted to help her out but now he’s going to have to do some fast thinking to salvage this situation.

A well thought out story with touches of the wealthy lifestyle and basic heartfelt emotions.  When two people are right for each other, the sight to keep that love alive is worth it.  I enjoyed this novel very much and am looking forward to continuing the series.

Looking for a happy ever after love story set in lush surroundings?  Then The Billionaire’s Deception is perfect for you.  Check it out and get caught up in the luxury and love.

*I received an e-ARC of The Billionaire’s Deception from the publisher and NetGalley in exchange for an honest review. That does not change what I think of this novel.*

Back to St. Barts by Emme Cross

Back to St. Barts by Emme Cross