The Billionaire’s Temptation by Katherine Garbera 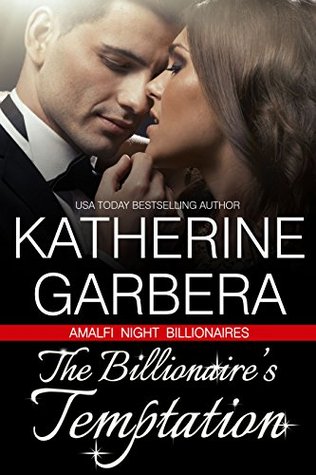 Rocco De Luca lives and loves in the fast lane. A past Formula 1 champ, he has been jetting around the world arranging celebrity charity races and partying with the world’s elite. Coming home to Isola del Fiori and filling in for his older brother for a few weeks sounds…well, boring. Until he meets Steffi Harlan.

Steffi Harlan is sophisticated, elegant, and way too smart to fall for a tanned chest and a bad-boy smile, or so she thinks, until she’s put in charge of keeping the jet-set playboy out of trouble while he’s gone. Sure, no problem. Except Steffi isn’t immune to Rocco’s charms.

They burn up the nights they spend together, and the last thing Steffi wants is to crash out and end up with a broken heart… Can they both survive love in the fast lane?

Read on for my thoughts on The Billionaire’s Temptation.  No true spoilers, promise.

The start of a new series from Tule Publishing is always something I look forward to, and the kick-off to the Amalfi Night Billionaires series certainly did not disappoint.

The Billionaire’s Temptation is a sensuous, emotional and simply fun tale of two people who live in their own fast lanes and the sparks that explode when their paths finally meet.  Steffi has worked for the De Luca’s resort as assistant to the president for years.  Now she’s close to a big promotion which she wants badly and is fully capable of handling.  Her intelligence and elegance combines for the perfect touch for the promotion her boss intends to offer her, once he returns and once she successfully handles the hotel and his younger brother in his absence.

Rocco is well simply put, sin walking.  Handsome, wealthy, a Formula One champion – Rocco is a walking billboard for playboy.  And the public and the media see that side of him.  But now he’s bored.  No challenges to distract him and longing for something.  Perhaps his age is catching up with him but he wants something more to show his brother that he is capable of handling his position at the hotel.  He wants Steffi but not in the usual take a woman for a night and leave fashion of his past.  Steffi intrigues him, on some level makes him need to show off the sides of him that he’s kept hidden.  She is the one for him, now his challenge is not only to do well at the family business but to capture the heart of one very special woman as well.  One that will last a lifetime.

Steffi has the passion of her father and the caution of her mother waring for dominance within her.  She is so attracted to Rocco and believes the public persona he dishes out.  The last thing she wants is to babysit this handsome devil, no she’d much rather explore the passion that she suspects he has for her as she does for him.  She hadn’t considered that she would come to love him, or dared to hope that he might return that feeling.  Knowing she’s heading for heartache won’t stop her from enjoying what they have together for as long as she can.

Sparks fly and the love gets hot and heavy in The Billionaire’s Temptation.  I enjoyed this one immensely, and as with most first novels in a series there were lots of delicious clues and breadcrumbs scattered about with secondary characters that I’m certain we will learn more about in the coming weeks.

If you are looking for a little drama, lots of intense emotions kind of romance then The Billionaire’s Temptation is perfect for you.   Rocco and Steffi are so good for each other and their love will draw you into this story and probably the rest of the series.  Indulge yourself in romance and simply enjoy.

*I received an e-ARC of The Billionaire’s Temptation from the publisher and NetGalley in exchange for an honest review. That does not change what I think of this novel.*