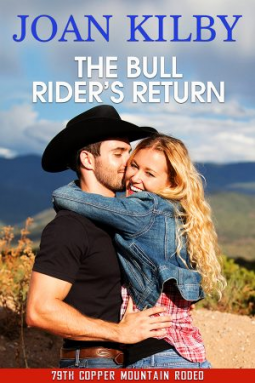 Rough rider Cody Starr relishes his reputation as the bad boy on the rodeo circuit. When he impulsively leaves his prize money as a tip for a struggling waitress so her little boy can get a heart operation, Cody keeps quiet about it, knowing he’s only atoning for past sins. His good deed is outed when Kelly Reid drives across three states to thank him in person. Despite the fact that Kelly forces him to confront his past and question everything, Cody starts to fall hard for her.

Single mom Kelly Reid thinks Cody is a Hero with a capital H. She believes in Cody, but she knows that nothing long term can come of their intense attraction until he believes in himself. Is Cody the love ‘em and leave ‘em guy he claims to be or could he possibly be the man of her dreams?

The Bull Rider’s Return has so many layers to it that as I read this engaging romance those layers were slowly peeled away to show what is beneath the surface of all the characters.  It’s not a simple story of a bad boy cowboy doing one out of character good deed… it’s far more than that.  And I believe I fell a bit more in love with Cody as every insecurity, every encounter with his loving but not understanding him family was revealed.  You need to discover the real Cody for yourself as you read his story – but he is not the bad boy, love ’em leave ’em, uncaring man that his reputation and the opinion of his family and his hometown make him out to be.  Cody is his own worst critic.  At the tender age of 16 he made a decision that changed his life.  Who among us can look back at our 16 year old selves and not cringe a bit at the decisions we made.  Yes, he runs when things get intense, when no one will try to see a situation from his side only placing misguided blame where it doesn’t belong.  Personally, I hurt for Cody and disliked his well meaning but doing it in the wrong way family.

Kelly was easier to understand.  Her issues come from being left behind with a son who will have health issues his entire life unless a very expensive operation van be funded.  His father wants nothing to do with a baby, so Kelly and Ricky have been on their own, struggling to survive.  I got Kelly’s trust issues.  I thought she went a bit overboard at one point when she did the very thing she’d accused his family of doing… but her reaction was realistic for her personality.

These two needed each other.  It’s as simple as that.  They each had issues yet when together, and dealing honestly with each other, the spark, the connection was so plain to see.  I enjoyed the heck outta this story.  It made me think, it made me feel and it let me connect with a very complex cowboy who couldn’t see his own worth… until the right woman, and the right kid came into his life.  If you’re looking for a fast, cowboy, rodeo loving romance then you’ll find that in The Bull Rider’s Return… but you will also find some deep layers and a story that is so much more than what you see on the surface.