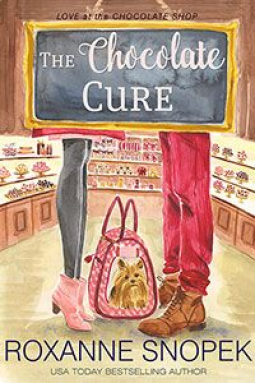 New Year’s resolutions are great. Announcing them in a crowded bar, with a chocolate martini in her hand? Not Maddie Cash’s finest moment. It’s time this new realtor got serious about her life and this time, she means it.

But when hospital volunteering lands her at the bedside of bruised and battered Mick Meyer, who has no knowledge of Maddie’s reputation – and no memory of the kiss he begged from her during that long, pain-filled night, her best-laid plans are put in jeopardy. It’s not just his sweet tooth that’s tempting her.

The hunky bush pilot with the concussion has an old family property to unload. Making this sale could be Maddie’s professional salvation. But when Mick turns on the charm, she’s in danger of forgetting all her best intentions… on chocolate… on meddling… and especially on men

I adored The Chocolate Cure for several reasons, but mainly because I recognized Maddie in so many people I know, and even a bit in myself.  For about 90% of the human population feeling like we don’t fit the job, or that we aren’t good enough, or that we’re missing something but we can’t quite describe what that is… brings us to exactly what Maddie is experiencing.  She’s determined to “grow up” but in her self imposed change myself mode she’s also not seeing that she can “grow up” but she doesn’t have to leave people behind or… be perfect.  She simply has to be herself, the rest will fall into place.

Maddie is a real estate agent who really isn’t cut out for that throat slashing profession.  She’d rather find the perfect house for a young couple that they can truly afford or keep the elderly couple in the home they’ve lived their entire life in with some outside help instead of selling it.  So, she’s not meeting her commissions or sales quota and that’s causing some big troubles back at the office.  She has a month to turn her productivity around or… well, there’s the door.

With that overshadowing her New Year’s Eve celebrations, added to the fact that most of her friends are with their own families this holiday, Maddie enjoys herself at Grey’s Saloon, drinks a bit too much and makes a silly resolution from her spot on the top of the bar… so not cool.  No chocolate.  No meddling.  No men.  *cough* What in the world has she gotten herself into?

A few days into her “new life” she’s volunteering at the hospital when a friend of her step-sister’s fiance comes into the ER with some major injuries.  Mick is a pilot and had been at his newly inherited property with Chad and friends doing the bachelor stag thing when he’d decided to move his plane – without buckling himself in and took a nasty fall when the tire hit a large rock.  Now he has several injuries not counting a mild concussion.  Maddie happened to be the one person available to stay with him and watch over him as he was worked on.  During that one night Mick was at his most vulnerable – sick, injured and a bit out of it.  But he did remember one thing – Maddie and her magic healing touch.

The Chocolate Cure allows this couple to see each other with all their vulnerabilities laid bare, eventually.  To see, to feel and to begin to care about someone aside from themselves.  Maddie and Mick are a believable, realistic couple in the process of falling in love.  They’ve just found someone who they truly love and discover that they are loved in return.  And that is a precious moment for any couple.  Their happy ever after is implied from the rest of the story… but it’s truly there, simply not wrapped up in a wedding or an engagement ring.  I have no doubt that Mick and Maddie will continue their romance to it’s natural conclusion – perhaps we’ll run into them again for a bit during the rest of this series.

I would highly recommend this story, and this series, to any Romance reader.  A clean romance that gives us hope and reality all wrapped up in two people who belong together.  Yeah, you’re going to want to pick this one up –  it’s well worth your time.

« The Den of Iniquity by Anabelle Bryant
Claimed by the Mate, Vol. 3 by Kate Douglas & A. C. Arthur »