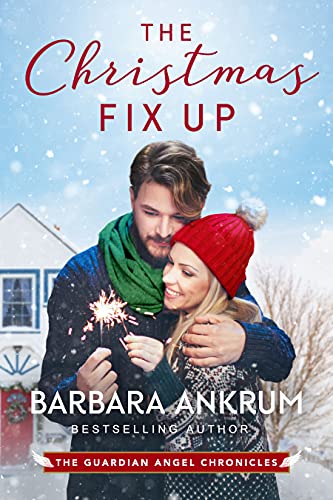 The Christmas Fix Up is the second title in The Guardian Angel Chronicles series and it is a delightful, funny, emotional journey for one adorable little girl, her widowed father and one mishap-prone angel.

Elle captured my heart from her first appearance.  This angel has been through so much that it’s impossible to not love her on sight and feel for her previous life, and also the incident-prone life she’s lived as an angel.  She sparkles with emotions, and those emotions are going to become somewhat complicated when instead of opening Sam’s heart to a new love, a new step-mom for Molly… she’s opened his heart toward her, and her heart toward the impossible, Sam and Molly.

Sam is a good man who has done his best but often feels his best isn’t enough for his beloved daughter and apparently, the guardian angel counsel feels the same.  Watching the interactions with Elle, seeing these two open their hearts to possibilities again was an emotional, delightful journey.  And… Molly is a little scene-stealer, precious beyond description.  This is a family in the making aside from that one little angelic complication.

I always have a good time back in any world that Barbara Ankrum creates, but I’ll admit that The Guardian Angel Chronicles is perhaps my favorite of her worlds (so far).  Although it’s a Christmas themed romance, I believe you’d love this one any time of the year for love does conquer all in the end.  The Christmas Fix Up brings a small town to life with believable characters, interesting situations to be dealt with, and a couple you’ll be cheering on to find their forever happiness together as a family.