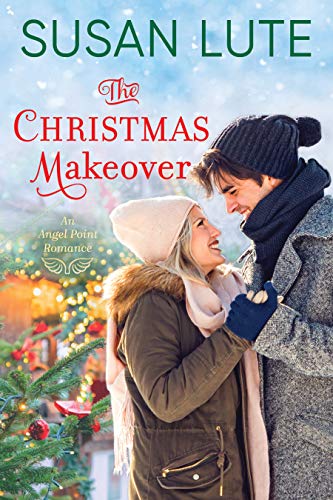 He’s ready for the lights…

Baker Grant Reed loves discovering new Christmas recipes, making people smile, and Angel Point—not necessarily in that order. But when his editor turns down his proposal for a Christmas cookbook, he must show her how serious he is about becoming the premier pastry chef in the country. He turns to his best friend, Faith—if anyone can give him a complete makeover that will turn heads, she can.

She knows how to make things sparkle…

In her past, Faith Hathaway was a costume designer for some of Broadway’s most prestigious plays. Now, after moving to Angel Point to help her grandfather, she owns and operates a vintage boutique and helps out at the local theater. When Grant asks for a makeover, she’s torn—she loves him the way he is, mismatched socks and all.

In exchange, he promises to show Faith, who has never enjoyed the holiday season, the magic of an Angel Point Christmas. But as the two grow closer, Grant can’t help but wonder…has he got his Christmas wish all wrong?

The Christmas Makeover is the third title in the Angel Point series, and it is a delightful romance taken from a different viewpoint.  Usually, it’s the women who enjoy the dramatic makeovers that transform them from duckling into that beautiful swan… this time, it’s Grant’s chance to have such a special event happen with surprising results.  A sweet, friendship to love story, Grant and Faith will capture not only your imagination but your heart as well.

Faith is a new resident of Angel Point.  Oh, her grandfather owned a business and she visited, but her life had been in New York as a costume designer for some very famous Broadway plays.  That all changed when the man she was to marry broke up with her last Christmas, in a very nasty fashion – and her beloved grandfather tripped over his cat, broke his leg, and needed Faith’s help.  Eventually, she bought out her grandfather, and the vintage shop, Faith’s Attic, was now hers – she loves the town, her shop, and her friends… but Christmas, not so much.  Until one man, who could be so much more than a friend, sets out to change her mind about Christmas, and maybe him, too.

While I love an Alpha male, I also appreciate men like Grant.  The quieter ones, the deeper ones, the guy who often stays in the friend zone far too long as he’s too shy, or unsure to make that huge play for the lady of his heart.  Frankly, Grant is just adorable exactly as he is (was), but a disappointing conversation with his editor, the “not really interested” response about a special Christmas cookbook has Grant rethinking his goals.  And the challenge of helping Faith enjoy the Angel Point Christmas season is the perfect distraction.  Until the possibility of changing up his style, both as an author/baker and a total makeover of his appearance will have some unexpected surprises in store for Grant and Faith.

I had a good time in Angel Point for The Christmas Makeover.  A romance that would engage me at any season, but especially at Christmas for this story is full of the charm and beauty of a small-town Christmas celebration.  I liked Grant and Faith, they fit well together, and the slow burn of falling in love for them was an emotional journey that I enjoyed.  I don’t know if there are more stories planned for the Angel Point series, but I’m keeping fingers crossed that we’ll return one day soon.