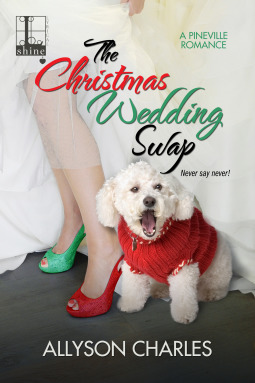 Allison Stuart has always been the odd-woman-out of her family. She wears her jeans a little too tight, colors her hair a little too blonde, and instead of going into medicine and law like her sisters, she runs a diner. She’s also the only single sibling left. And while she won’t change her style, and her meatloaf is to die for, thank you very much, she wouldn’t mind her share of wedded bliss. So she makes an early New Year’s resolution: No more meaningless flings.

Drop-dead sexy Luke Hamilton is everything Allison has sworn off. His only serious relationship has been with his five-star restaurant, Le Cygne Noir, in Chicago. When he’s threatened by a lawsuit, Luke decides to hide out in Pineville, Michigan, until the statute of limitations runs out. The small town is filled with Christmas charm, but he can’t imagine living there. Heating things up with the hottie who owns the local diner would make his exile bearable—if he can convince her to give up her ridiculous resolution . . .

Titles in the Pineville series include:  Putting Out Old Flames – The Christmas Tree – Why Did It Have To Be You? –  The Christmas Wedding Swap –

I have not followed all the stories in the Pineville series, although I plan to correct that – I did read the previous Christmas story The Christmas Tree  I don’t feel that you “have” to have read them all for anything that is important from the previous couples’ stories are explained in either the narrative or dialogue quite naturally.  So don’t let “jumping into the middle of a series” stop you from enjoying a touching, enjoyable Christmas Romance that perfectly describes The Christmas Wedding Swap.

Luke made a colossal mistake, one that busy, swamped business owners so often do… he let one piece  of paper be slipped into a pile of others to be signed sight unseen and unread.  Not a smart move, which is why he’s now waiting out the consequences in this small town where he’s bored to tears and angry as a wet hornet.  When he steps in to help an attractive small diner owner, Luke saw it as something to do, maybe flirt a bit with an attractive woman and make his time in this charming town fly by faster.  He certainly didn’t expect to be caught up in the charm of Pineville… or to want more than he thought was enough with Allison.  Now he’s looking at a way to make forever a reality for two people with such different needs and goals.

In her family’s eyes, Allison has never lived up to her potential or their expectations.  Never shy about telling her how to run her life, they’re stepping in once again with their barbs and comments that they believe are helpful but in reality wound her to the core.  She’s happy doing exactly what she is doing right now.  She doesn’t need wedded bliss to complete her, she needs to be left alone to live her life as she sees fit.  When a handsome customer steps in to help out at the diner she never thought it would be the beginning of something life changing.  While it seems Luke has his secrets, he also has a way in the kitchen, changing her recipes and making small improvements that take her diner up another level.  She wants to trust in this man, but she’s been burned far too often.  How can two people so different find something that will bring them together… forever together.

The Christmas Wedding Swap delivered a charming couple, some issues and a lovely Christmas feel to this small town romance.  While there were many laugh out loud moments, some tender moments there were also times when I seriously wanted to smack members of her family upside the head and tell them to shut up, mind their own business.  In short, I enjoyed myself immensely – and I believe you would as well.  I’d definitely recommend this story to any reader who loves Romance, especially Christmas Romance, likable, believable main characters and a touch of mystery.

A Baby for Christmas by Joan Kilby

A Baby for Christmas by Joan Kilby