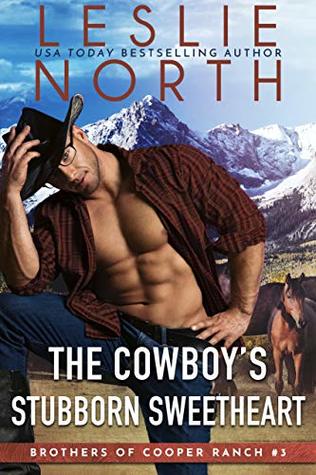 THE COWBOY’S STUBBORN SWEETHEART is the third story in Leslie North’s the Brothers of Cooper Ranch series… and it is a bittersweet reunion of former sweethearts who moved away from each other to their dreams only to have them fall apart and return to the ranch once again.

While both Wright and Julianna have been dealt unfair blows to their respective careers both are stubborn and determined to pull their lives together again.  Wright returned home to the ranch, Julianna returned home to help out when her mother was injured and couldn’t work.

At one time they had loved each other, but their dreams took them in far different directions.  Julianna to New York City to pursue her dream career as a photographer, Wright to stay in Montana and help his state by becoming a political fundraiser.  When they both had their dreams ripped from them, through no fault of their own, it’s time to come home and regroup… they hadn’t expected to see each other again or for the love, they believed buried to be brought back to life.

THE COWBOY’S STUBBORN SWEETHEART is an emotional story of accepting what life tosses at you and rebuilding, even when that means changing your path.  I liked both Julianna and Wright, they are both stubborn and that plays into their story quite well.  If you enjoy a second chance romance with a few twists, intriguing characters and a message of hope no matter how bad life looks… then you’d enjoy this story.  I’d not hesitate to recommend any story in this series.

« A Cowboy and a Promise by Pam Crooks
Cowboy to the Rescue by Ann B. Harrison »