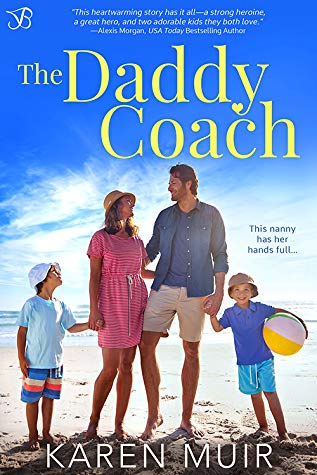 Hoping to vindicate her brother, botanist Gina Dunn poses as a nanny to the man she believes framed him. Even though she grew up in a dysfunctional home, how hard can it be looking after twin four-year-old boys? If she can nurture rare orchids, surely she can handle this.

Instant fatherhood hits contractor Will Sinclair hard when his twin sons he didn’t know existed come to live with him. The rebellious boys reject Will as their real dad, forcing him to turn to Gina, his new nanny, for her “expert” help.

Interacting with Will and his boys as a “daddy” coach, Gina starts to crave the family she’s always longed to have. But Will’s reaction when he learns of her deception isn’t her biggest fear––one of two men she loves is lying…

THE DADDY COACH is a sweet, heartwarming romance between two unlikely people who neither have the slightest clue on how to raise twin boys.  Boys who have just lost their mother and the man they called “Daddy” in a horrible accident.  Now, Will has discovered that from his brief marriage he has sons that he was never made aware of and he is dumped in the deep end of the pool without the least idea of how to swim.

Gina believes her brother’s story with all her heart, after all, he’s kin, he’d never lie about something so important as being framed, right?  Well, maybe, but in this case, Gina is backing the wrong man one she trusts and is determined to bring the “guilty” man to justice.  Only, Will isn’t the vile man she expected and her ploy of poising as the boys’ nanny isn’t working out as she intended.  Perhaps because she also has no clue and is taking her instructions from Google.  Now two people at cross purposes with nothing but determination and a search engine to help have their hands full with two little boys who are hurting and a growing attraction that can’t possibly be love.

I had fun with THE DADDY COACH.  Gina did at times frustrate me as she’s so certain that her brother would not have lied to her.  At some point, reality has to set in.  Yeah, she’s been used big-time.  I completely got how angry Will was when he learned of Gina’s deception.   This is a man at wit’s end with so much going on in both his professional and his personal life that he’d thought he found a woman to trust and love – hard to accept that it was all pretend – or was it?  Watching Gina and Will face the truth and work their way back to that happy ending that they all deserve was an enjoyable journey.

If you love a good romance with touches of laughter, tears, and some frustrations or misleading actions then you’ll want to pick this one up right now.  You’ll find likable characters, adorable if hurting kids, and two people who may have to work for their future but find that it is worth the risks they must take.

I’m glad that I am a curious cat for when I searched for Ms. Muir’s website I discovered that this story is the beginning of a series, Fish Out of Water, with the next title out in November – I’ll definitely be keeping an eye out for that one!

Tags: A Fish Out of Water #1, Karen Muir, The Daddy Coach