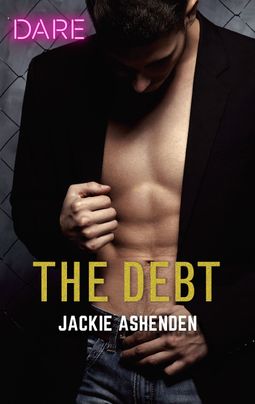 Notoriously ruthless property developer Ash Evans never forgives a debt. And I have two days to convince the former street fighter not to pull his investment in my father’s company. Taking a job as his chauffeur in Paris is the only way to get close enough to ask the bad-tempered billionaire for a favor.

With his sexy tattoo, scars and magnificently cut body, he’s as powerful, sleek and difficult to manage as the sports cars my family designs. And after meeting his electric-blue eyes in the rearview mirror all night, I’m more than happy to rev his engine and take the boss for a ride!

But now Ash thinks I’m just using him to get what I want. And he’ll give me what I need, but there is a price—posing as his girlfriend to help him exact vengeance on his half brother. Pretending to love Ash is the easiest job I’ve ever had…and soon my heart is racing into danger. Will a man so full of anger ever be capable of loving me back?

Titles in The Billionaires Club include — The Debt –

THE DEBT is part of The Billionaires Club quartet from Harlequin Dare™ with a couple that will melt your Kindle quite easily.

Ellie has the perfect plan to ask investor Ash Evans for more time to bring her family’s company out of financial troubles, to not pull his investment in them just yet.  Unfortunately, plans on paper often work out quite differently in reality.  She’s taken on the job as his chauffeur in order to get close enough for that conversation, yet she never expected that the sizzling chemistry between would take over before she had the chance to put her plan into motion.  Now she’s stuck with an angry Ash who feels used and lied to after their burning up the sheets night together – and she’s falling for a very bad boy with an attitude a mile long.  Oh, he’ll consider her request once he gets what he needs from her short-term which is a fake girlfriend to finalize his own plan against his half-brother.  Funny, how plans rarely work out as intended when emotions come into play.

I liked both Ash and Ellie.  They’ve had to handle rough patches in their lives, they are both stubborn and determined, yet at their core, both Ash and Ellie are people who have been hurt and are very defensive in differing ways.  Watching them enter into a sizzling hot pretend relationship that suddenly takes a turn neither expected was such an enjoyable journey.

If you enjoy a hot, sizzling, totally sex personified type of bad boy and the woman who can show him what love can be then you’ll want to pick up Ash and Ellie’s romance and get ready for a steamy ride.  I would not hesitate to recommend THE DEBT to any Romance reader who enjoys their couples a bit too hot to handle.