Posted May 4, 2020 by Marsha in Paranormal Romance, Series / 0 Comments 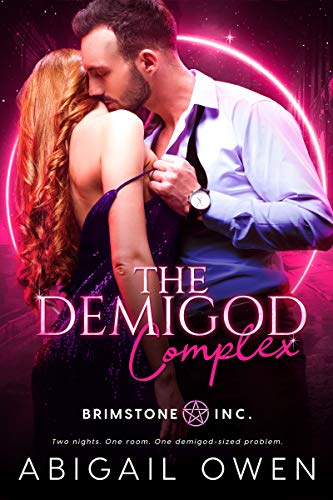 When Lyleia Naiad was head-hunted by Brimstone, Inc., for her job as Executive Assistant to a high-powered billionaire demigod, she was given one directive—do NOT fall in love with Castor Dioskouri. Doesn’t matter if he’s the son of Zeus and can electrify a room with a single glance. As an ex-nymph, she possesses a unique ability—a gift from the goddesses to protect nymphs from the randy gods—to resist her boss’s charms.

Or so she thought.

He insists she accompany him to an alpha wolf shifter mating ceremony, an event where the pheromones fly, and so do clothes…and inhibitions.

Goddesses save her, because Castor has stolen into Lyleia’s heart, and she’s not so sure she can hold out much longer…

(There are more titles listed on Goodreads but I’m holding off listing them until it’s clear that they will be re-released into this revamped series, but you can find them on Goodreads.)

The Demigod Complex begins the Brimstone, Inc. series with a sizzling, fascinating story of two legendary creatures falling in lust and in love against all odds.  This title was previously published in 2016, yet has gone through re-editing which changed some things a bit.  Simply a heads-up should you already have purchased or read this story.

Castor, as the son of Zeus, certainly has the sex appeal oozing from his pores, and the constant line-up of weekly new female interests proves he knows how to use that charm.  The love of Castor’s life, his wife, died long ago and he’s never contemplated the possibility of finding love again.  Yet, over the past year of working closely with Lyleia, he’s discovering that all of his passion isn’t quite controlled around this former nymph – and he’s doing everything in his power to ignore the attraction and need he feels around her.

Lyleia had the most precious and necessary thing stolen from her by a wolf shifter long ago – her spring, the body of water that she loved, needed, and lost.  Now she’s mostly an outcast from her family and tends to not stay in one place very long.  She knows it’s time to leave Castor’s life and move on to the next spot yet she’s unexpectedly attracted to this man who only has the heart for one true love, his deceased wife.  It’s time to move on, but Castor will insist on one weekend trip to an Alpha werewolf’s mating ceremony for several reasons.  Mostly because of the pheromones running out of control at such an event, and he’s determined to not take up with any woman at that ceremony – so Lyleia is for his protection, so to speak, and still, he cannot ignore the attraction between them so perhaps more was on his mind from the issuance of this working weekend deal.

It might have been a sizzling, fun weekend if Lyleia hadn’t run into the wolf shifter who stole her spring – now the situation has changed drastically – for everyone including Castor for this demigod is hooked and no one will harm his woman.

There is a lot packed into this novella, yet it doesn’t feel or read as too short for the story being told,  The Demigod Complex is certainly sexy, sizzlingly sexy, but it’s also emotional with a very nasty bad guy to be dealt with.  I was easily caught up in this world and enjoyed every moment of my time there.  I already have Shift Out of Luck downloaded (from NetGalley) so, I decided to go back to the first book, and I’m very glad I did.  If you love a really good, engaging Paranormal Romance or Shifter Romance then I believe you’d feel right at home in this world.