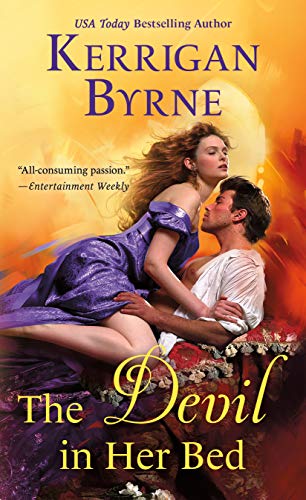 As I finished The Devil in Her Bed it became apparent that this is one of those bittersweet moments when I needed to know what came next for Francesca since even as a secondary character, this series/trilogy has always had her at its base.  Yet.  I didn’t want to leave the world of the Red Rogues, the friends closer than sisters, and the men that these women now enjoy as life partners as the Devil You Know series concludes with this amazing tale.  I hope that we get the chance to run across them again, perhaps as cameos in another series for I feel their combined stories aren’t quite done yet – or I simply don’t want to leave them behind.  I will mention that I do not believe a reader new to this series can pick up The Devil in Her Bed on its own without experiencing some confusion.  Each story builds on events, revelations from the previous one, and I believe it would be difficult to understand some of the “whys” put forth in this final story.  That’s my own opinion, though, sometimes it’s just not possible to go back to the beginning.

Chandler is a man of mystery, known by many names, bound only to the Crown as one of their most valuable and deadly operatives of the secret service.  (his identity has been an open secret throughout this series, clues abound about him)  Yet this keeper of secrets has met his match in Francesca, the one person holding perhaps as many secrets as he is.  Watching them attempt to outwit each other was a roller coaster ride of laughter, steaminess, danger, annoyance, frustration, and eventually love, the kind that can last a lifetime.  But they had a long and difficult journey to get to that happy ending as secrets revealed do make a difference, and the vile Crimson Council is taken down.

The Devil in Her Bed had me flipping pages quickly as the tensions and the danger intensified.  In Chandler and Francesca, we have two very intelligent, extremely stubborn people at cross purposes with each other so often in their story – of course, those secrets got in the way as well.  While I adored them both and felt they were a well-matched couple I’ll admit that there were times when Francesca’s stubbornness could have done more harm than good.  And Chandler?  Oh, he pulled a stunt that had me itching to smack him upside the head a few times.  Men!  I would have made him grovel longer, but that’s me.

When the smoke clears, and all secrets have been revealed (we hope) that was the moment when I realized just how much I was going to miss these characters… but I was so glad to experience their unique stories.  If you love a really good Historical Romance series full of danger, intrigue, secrets, and finding the love of your life when least expected, then The Devil in Her Bed and the Devil You Know series is a perfect match for you.

*I received an e-ARC of this novel from the publisher, St. Martin’s Press via NetGalley. That does not change what I think of this story. It is my choice to leave a review giving my personal opinion about this book.*