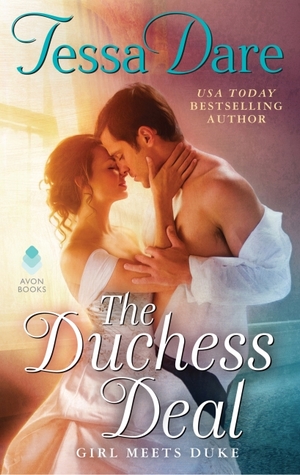 When a girl meets a Duke, their marriage breaks all the rules…

Since his return from war, the Duke of Ashbury’s to-do list has been short and anything but sweet: brooding, glowering, menacing London ne’er-do-wells by night. Now there’s a new item on the list. He needs an heir—which means he needs a wife. When Emma Gladstone, a vicar’s daughter turned seamstress, appears in his library wearing a wedding gown, he decides on the spot that she’ll do.

– They will be husband and wife by night only.

– No lights, no kissing.

– No questions about his battle scars.

– Last, and most importantly… Once she’s pregnant with his heir, they need never share a bed again.

But Emma is no pushover. She has a few rules of her own:

– They will have dinner together every evening.

– Last, and most importantly… Once she’s seen the man beneath the scars, he can’t stop her from falling in love…

In many ways THE DUCHESS DEAL reminds me of a Beauty and the Beast type of story where the man is so scarred emotionally and physically that he truly becomes in his eyes (and maybe society’s) as a beast who finds his cure in the love of a woman who sees the man in spite of everything else.  Since I came to this series late it seems that every reader has their own opinion, good and bad, about this story.  Fortunately, I don’t depend on reviews to pick what I read – if I did I might have missed this gem and that would have been a shame.

Ash and Emma are as unlikely a couple as you will find.  One scarred Duke, one impoverished vicar’s daughter making a living as a seamstress may seem actual worlds apart – and they are as far as society goes anyways.  Yet they work.  Each has strong opinions, snarky humor (oftentimes with themselves as the object of that humor), neither backs down easily from what they believe in, and both have their own issues to be dealt with through the course of their romance.  I liked them both for slightly different reasons.

I enjoyed myself with THE DUCHESS DEAL and since I have the next two books in my possession I’ll be diving into the next book in a few days.  If you enjoy an odd-couple romance, snarky humor, sizzling sexy moments, and a really good story then you’ll want to pick up THE DUCHESS DEAL, sit back and enjoy yourself.

It’s good to have friends, it really is – especially book-loving friends.  I had picked up the third story in this series thinking I had the two earlier ones on a shelf – turns out that wasn’t clear remembering on my part.  So I first turned to my Historical Romance loving friend to see if I could borrow her copies if she had them.  So I was able to come to the Girl Meets Duke series a bit late, but at least reading the series in order thanks to a book-loving friend. *grin*  (and because she’s not a re-reader, I now own the entire series, so far)

I own a paperback copy of The Duchess Deal.