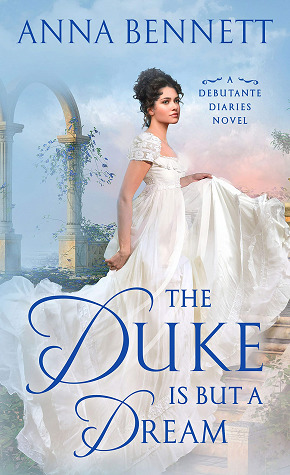 THE DUKE IS BUT A DREAM is the second title in Anna Bennett’s Debutante Diaries series.  I had such fun with this addition to the series, a hidden identity is always a hook for me, yet when amnesia is added into that mix it simply ratchets up the enjoyment level.  To be frank, that amnesia twist can go either way in the end, either furthering the enjoyment, suspense of discovery or becoming trite and unnecessary to the story.  For Lily and Nash’s romance the fact that Lily truly did not know who she was but that she certainly instinctively felt enough that she shouldn’t let Eric discover her identity was an intriguing part of their story – and it worked for me.

In every book, there are points that will give me a moment’s pause, and then I make the choice to move beyond because it’s not my tale to tell but the author’s imagination at work.  There were several of those pauses with Nash, and to explain why would, or could be considered spoilers.  Nothing that made me stop liking him or the book, but enough to make me wonder how a Duke could actually do some of these things considering the importance of reputation in the time period (or at any time really).

I really want Nash’s sister, Delilah to have her own story or be part of a series one day.  She’s strong-willed, and an interesting secondary character that I would enjoy knowing more about.

In all, I enjoyed THE DUKE IS BUT A DREAM.  Sure, there were pauses for me, yet those things that I’d never expect to fly with the ton were an important part of their story.  Now, it’s time to wait for WHEN YOU WISH UPON A ROGUE, the next title in this series about three very unique friends and the men who will be charmed by them… eventually.  I’d not hesitate to recommend this Romance to any reader who enjoys a good love story, can suspend belief on some things, and simply settle in to enjoy the story – for that is the whole point of reading any Romance.