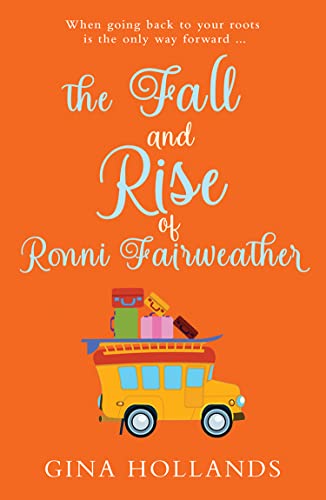 Sometimes life as you’ve known it comes to a screeching halt, and circumstances leave you with only two clear choices — give up or move forward as best you can.  When Ronni’s husband’s death by his own hands revealed the massive mess he’d left behind she was left with not only dealing with her husband’s suicide but also the ramifications for their daughter, Sabrine, and the lifestyle they’d both known… and would now leave behind.  As Ronni returns to a small town she’d sworn she’d never go back to she’s about to discover the power she has as her own woman, without the blind belief in wealth or empty promises.  She’s about to take on the world in order to protect her daughter and herself.  Neither is going to enjoy this journey, at first, but both mother and daughter are about to learn some lessons in the importance of things being much lower than the value in people to trust and your own self-worth.

The Fall and Rise of Ronni Fairweather is a remarkable story in many ways.  As the wife of a wealthy man, Raegan had everything she could ever desire, or so she believed.  When her husband’s death showed just how little she knew of the man she’d married or the lies he’d lived she was understandably crushed.  Yet with a daughter to continue to raise when they were now completely penniless Ronni had to put the big girl panties on real fast and grow up and deal with life as it is right now.  And that meant surviving.  The selling of their home, cars, almost every possession that could be sold gave her the chance to return to her roots, build a small business, and begin the process of healing and growing into her own power and self-worth.  The journey will be far from easy, there will be many sleepless nights, decisions constantly questioned, and demons from the past to be faced.  But Ronni will prove to everyone (the reader included) that she’s made of stronger stuff than she ever gave herself credit for… and for her daughter, she’ll do anything.

I loved watching the changes in Ronni (and in Sabrine) from the start of The Fall and Rise of Ronni Fairweather until a very satisfying conclusion.  There is anger, tears, and even laughter to be found in this story of a woman’s strengths when both she and the world could only see her weakness.  I enjoyed this one so much.  It was gratifying to discover a Ronni who could stand proudly on her own, and a Sabrine who could feel the power of her mother and herself in their new circumstances.  There is so much more to say… that I will not go into as I avoid obvious spoilers whenever possible.  I’ll say I deeply enjoyed this story and would encourage you to give it a try as there is far more to Ronni’s story than even she expected.

*I received an e-ARC of this novel from the publisher.  That does not change what I think of this story. It is my choice to leave a review giving my personal opinion about this book.*

« The Summer Cottage by Annie Rains
Abandoned in Death by J. D. Robb »