The Firefighter’s Cinderella by Sonya Weiss 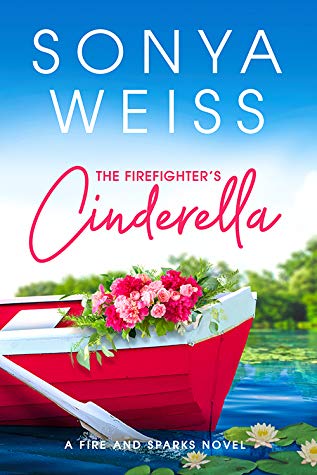 What’s a Cinderella to do when she’s accidentally kicked her Prince Charming in the face and broken his nose? Hold an audition, of course.

Harper Bailey is desperate to keep her family’s amusement park business up and running, but her employees keep quitting, and the man playing prince to her Cinderella in the company’s mainstage show is just the latest casualty. When sexy firefighter Rafferty Bradford, the most eligible bachelor in their small town, offers to step in, Harper agrees–reluctantly. After all, she and Rafferty are ex-best friends with a ton of past history. Surely they’ll have zero chemistry onstage.

Rafferty has his own reasons for agreeing to play Prince Charming, and none of them are good. If Harper finds out the truth, it’ll just reinforce every rumor she’s believed over the years about Rafferty’s bad rep. But when their chemistry explodes both onstage and off, he’ll have to choose between happily-ever-after for himself…or the Cinderella he’s fallen for.

THE FIREFIGHTER’S CINDERELLA is an engaging quick romance, one that I ended up rather torn on in my thoughts about it.  I liked a lot about this small town in Georgia, much like most small-towns everyone’s known you practically from birth and knows all of your business as well.  It supports two different styles of amusement parks and Harper’s family park seems to be having a long run of bad luck.  Bad enough that she’s willing to, or reluctantly willing to hire her ex-childhood friend Rafferty to help out with some of the performances.  They have a history, and while there was a lot of good in their past there are also some major heartbreaking moments as well.  Putting her trust in Rafferty is probably not a wise move on Harper’s part but with few other options, she hopes for the best.

Rafferty has a hidden agenda.  And once Harper finds out about it she’s going to be devastated once again by her old friend who might be turning into something more important.  He knows about her trust issues, he also knows that he’s not looking for the same things in life that Harper is – mainly commitment to one woman for a lifetime, building a life together or someday kids.  While he has his reasons for feeling as he does he still moves ahead with the plan – and ends up falling in love with the last woman he ever thought would change his mind.  Now he has to try to salvage a relationship while hoping that Harper can forgive… eventually.

I found THE FIREFIGHTER’S CINDERELLA to be a good story, clean and sweet (for the most part).  For me, the author did too good of a job in convincing me early on that Rafferty was an absolute jerk and I never could see past his actions toward Harper as he hurt her over and over again.  Not meaning to, but the hurt is still hurt whether it’s intended or not.  He is a player, a bachelor who sees love, family, commitment to one woman as a horrible fate and cannot understand why any man would settle for one when there are so many available.  I just… couldn’t like Rafferty.  And that dislike played over the rest of the romance for me.  Harper was far too good for this man, in spite of matchmaking grandmas and several second chances.  There is an audience who will love Harper and Rafferty as a couple, we all like different things in books, and in relationships.  It’s a good story, well put together, with engaging secondary characters – I simply could not care for our Hero and that changed my reactions to his story.

The Christmas Sing Off by Sinclair Jayne

The Christmas Sing Off by Sinclair Jayne