Christmas Romance, Darcy Burke, Love Is All Around #2, Regency Romance, The Gift of the Marquess 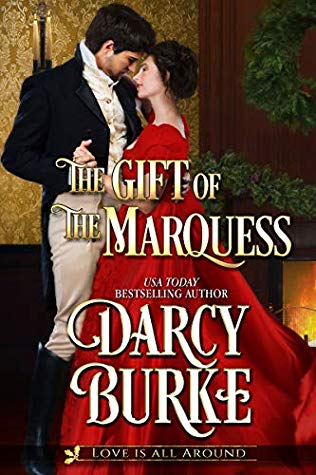 THE GIFT OF THE MARQUESS is the second title in the Love Is All Around series.  Poppy’s and Gabriel’s story will break your heart in many ways and perhaps heal it back up again as their marital adventures continue.  What you really need to know before picking up this story can be found in the Cover Description.  What you won’t find there is the emotional involvement you’ll find as you discover the heartache that Poppy is feeling as she remains year after year without becoming pregnant, as well as Gabriel’s absolute fear about his wife’s most personal, desperate wish to become a mother.

The love between Poppy and Gabriel is obvious throughout their story, which was never in doubt in my mind.  Their perceptions of their life together, the fears and longings are very real and dealt with in a realistic fashion.  After all, what was Poppy to think when a strange woman takes up residence in a cottage on their estate?  Although they do have some bumps in the road full of misunderstandings, they also talk which is refreshing – they simply don’t talk about their deepest fears until it’s almost too late.  Watching the lengths that Gabriel will go to in order to make his wife happy was amazing, which makes his real fears all the more poignant.  This one will touch your heart as two people already in love find that love tested and perhaps, strengthened by the events in their story.

What is up with Calder?  I need their brother’s story now for his actions have continued to confound me and I need answers.  You, too?  Hopefully, we get those answers in the next story JOY TO THE DUKE.  I would not hesitate to recommend Poppy and Grabriel’s story to any Historical Romance reader who loves watching an established, in love couple face life’s difficulties and come out stronger on the other side.