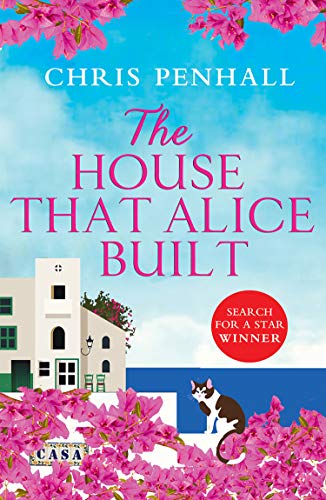 Home is where the heart is …

Alice Dorothy Matthews is sensible. Whilst her best friend Kathy is living it up in Portugal and her insufferable ex Adam is traveling the world, Alice is working hard to pay for the beloved London house she has put her heart and soul into renovating.

But then a postcard from Buenos Aires turns Alice’s life upside down. One very unsensible decision later and she is in Cascais, Portugal, and so begins her lesson in ‘going with the flow’; a lesson that sees her cat-sitting, paddle boarding, dancing on top of bars and rediscovering her artistic talents.

But perhaps the most important part of the lesson for Alice is that you don’t always need a house to be at home.

In just a few days now, ‘New Beginnings at the Little House in the Sun‘ will be released, a sequel to ‘The House That Alice Built‘ — and how in the world did I miss ‘The House that Alice Built‘?!  I’ve no idea either, but that’s been rectified now.  (yes, I’m one of those readers who really prefers to read connecting books in order – I’m odd that way, I admit)

For the majority of my time spent with Alice, I was either laughing or commiserating with how life had turned out for her before that fateful trip to Cascais, Portugal.  Sometimes it takes a good shaking up to really begin to see what’s going on around us – and that is certainly what Alice got from multiple angles (and people).  Her ex-boyfriend is just pond scum, and that’s polite, really.  He goes off on a self-discovery trip leaving Alice at home at a house they co-purchased as she’s renovating, lavishing love and attention on a building that, in the end, will become a bone of contention between them.  Who waltzes back into someone’s life and just ask for half a house?  When they did none of the work but want all of the profit?  Adam just made my head explode with anger, incredulous gaping, and just a nasty feel about this loser.  Alice deserved so much better than this… person.

When situations come to a head, and escape is all she can imagine, Alice finally takes her friend, Kathy’s suggestion to come to Portugal and leave Adam and his troubles far behind.  It’s probably going to be the best decision of Alice’s life… eventually.

I’ve said enough about the plot – now it’s up to you to discover how Alice’s life gets turned around through her own choices, and allowing herself to be herself.  Watching Alice’s adventures was fun and delightful – but really, I loved most the moments of discovery for her as she became almost another person leaving the constant anxiety, low self-esteem, second-guessing behind, and found a new direction for her life.  Sure, Alice will face some challenges, some decisions, not everyone is going to be ‘perfect’ in this new location – but she’s learning how to love, take care of, and look out for herself.  And that is empowering for anyone.

In a story with one funny, quirky cat sidekick, some good folks and some questionable ones you’ll find a woman’s discovery of what makes her unique in the world and watch as she embraces being herself, living somewhat in the moment, and not allowing the past to hold her back any longer.  I had such a good time with ‘The House That Alice Built‘ — and I know I’m going to have just as good a time with ‘New Beginnings at the Little House in the Sun‘ as well.

*I received an e-ARC of this novel from the publisher, Ruby Fiction/Choc Lit. That does not change what I think of this story.  It is my choice to leave a review giving my personal opinion about this book.*

Available in audio or for your favorite e-reader, mine is the Kindle