The Irresistible Rogue by Valerie Bowman 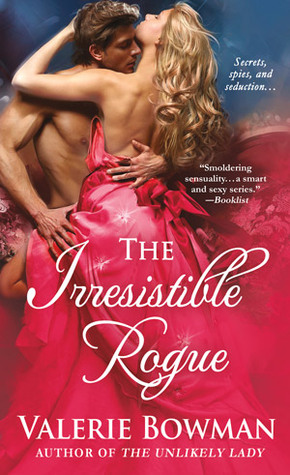 Lady Daphne Swift comes from a family with two brothers who have proudly served the Crown. She may be a female, but she’s willing to do whatever it takes to prove that she’s as useful to the war effort as her brothers. She even went so far as to secretly marry a spy. The fact that she just happened to have been pining for Captain Rafe Cavendish for years didn’t hurt matters. But after their first mission, when she realized their marriage had been strictly business, Daphne immediately wanted an annulment. The fiery Daphne has always been a multi-tasker and now she’s hell bent on two things: finding the men who killed her brother and securing her engagement to another man to forget about Rafe forever.

As a spy for the War Office, Captain Rafferty Cavendish has been on dozens of missions. But one mission haunts him, the mission that resulted in the death of Daphne Swift’s eldest brother, Donald. Rafe agreed to work with Daphne once and put her life in danger. Now he must find the men who killed Donald, avenge the family, and convince Daphne to give him one more chance. But Daphne’s enlisted her other older brother, Julian, to help her get a quick and quiet annulment so that she can marry a fop who only wants her for her title and money. Can Rafe convince Daphne to give him one more chance, on the mission and win her heart?

Read on for my thoughts on The Irresistible Rogue.  No true spoilers, promise.

If Rafe had romantic feelings for his convenient wife, then he had kept them well hidden during their marriage.  Granted it was a marriage that was solely for the purpose of a spy mission for the Crown, but Rafe had kept his distance.  If Daphne had hopes for her impromptu marriage to turn into a passionate love match she soon realized the folly in that thought.  The man she had cared for, had hopes that he had returned her feelings made it very clear that this was a marriage in name only, and only for the information they could obtain for the Crown.

Now Daphne is single mindedly setting out to find her brother’s murderer, and quietly and quickly ending her disastrous fake marriage to Rafe.  Unfortunately Rafe had other plans.  He would agree to the annulment on the condition that she accompany him on one last mission.  Together they would find who had killed her brother – and if along the way Rafe could convince his wife that their marriage was not simply convenience but his desire to have her at his side forever in a true union, then he would be a happy and content man.

The Irresistible Rogue is an absolutely delightful romance full of secrets, hidden emotions, revenge, and a love that two people should have acknowledged long ago.  I loved Daphne, she is a feisty, passionate woman who knows her own mind and isn’t afraid to take a risk.  Rafe is a charmer, sexy as sin and if his sense of honor got in the way of love once.. he wasn’t about to let that happen again.  Together they bring a strong story, a passionate love for each other and compelling secondary characters to a story that kept me turning pages with very few breaks away from my Kindle.

I would not hesitate to recommend this story to any reader who loves Regency Romance, a solid storyline, a couple who obviously belong together and fast paced action.  If you haven’t read the other novels in the Playful Brides series, now would be a great time to get caught up.  I don’t feel you must have read the earlier stories, of course if you did you’ll get a much more satisfying overview of the entire story treads.  While I cannot call any story within a series a stand alone, The Irresistible Rogue can be read on its own without any trouble.  Take a risk and pick this one up soon, I believe you’ll enjoy every moment spent with Daphne and Rafe.

*I received an e-ARC of The Irresistible Rogue from the publisher and NetGalley in exchange for an honest review. That does not change what I think of this novel.*