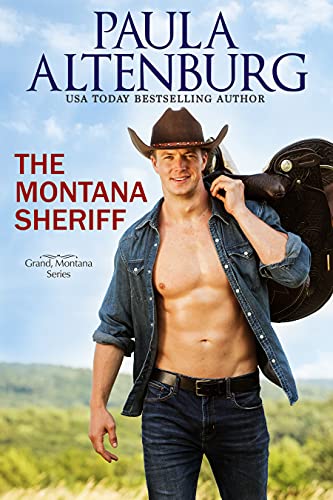 Down-to-earth sheriff Dan McKillop has always been more than a badge and a pretty face, but it turns out the ladies of Grand, Montana, find him far more appealing as the new co-owner of the Endeavour Ranch than they ever did as the town’s friendly, neighborhood playboy. Dan’s done with commitment-shy women only out for a good time. When a fiery beauty rides into his life on a sweet Harley-Davidson low rider, however, Dan fears he’s found trouble again.

Professional firefighter Jasmine O’Reilly is stationed to lead the airbase on the Endeavour Ranch for the summer. Having a safe and successful wildfire season could mean a promotion, and after raising herself out of poverty, Jazz has big dreams. She knows better than to put her future in a man’s hands no matter how charming, wealthy, or full of promises he is.

Good-intentioned but overprotective Dan soon realizes he has a type. Meanwhile, Jazz, who thought she was long beyond even the slightest brush with the law, finds the sheriff too tempting to resist.

The Montana Sheriff begins the Grand, Montana series, which is a spin-off from The Montana MacGregor Brothers series with three friends being surprised by a huge inheritance… that comes with strings attached.  But for billions of dollars, aside from the fact that these are simply good and caring guys, more land than they can ever use, plus all the buildings, equipment, and livestock already in place (aside from what they need to build to complete those attached strings)… who wouldn’t agree?

We begin with Sheriff Dan McKillop, who is definitely a sexy, handsome man with a bit of, let’s say an attitude toward women he considers adrenaline junkies.  There are reasons behind that attitude and he’s going to have to deal with his past before his future can be seen with clearer eyes.  Yet, those eyes are focused on Jasmine “Jazz” O’Reilly when she arrives on the ranch in her leathers, short skirts, and vintage motorcycle.  She’s the new station manager for his part of the inheritance of building a firefighter/smokejumper station on the ranch… and does Jazz ever have preconceived ideas about men like Dan, rich men like Dan is now.  Attitudes that she’s going to have to make a major adjustment to before the promising future she has with this billionaire can ever move forward to a forever kind of love for them both.

We run into familiar faces from The Montana MacGregor Brothers series along the way to finding happy ever afters for these three friends.  I found what little we learn of these men’s backgrounds in The Montana Sheriff to be fascinating, and I can’t wait to discover some intriguing secrets they’re keeping under wraps… for now.  Also, I’m curious if who they think is their benefactor truly did leave the ranch to them or if there are red herrings scattered about as well.  Time will tell on that one.

Jazz and Dan make an intriguing couple.  The battles to overcome their attitudes toward each other were epic in many ways.  They’re both strong, stubborn, and certain that their way is the only way life can go for them.  You’ll find laughter, sizzling chemistry, solid friendships, and a very good story in The Montana Sheriff.  I enjoyed myself here and look forward to learning more secrets and watching more stubborn men find their match in Grand, Montana.