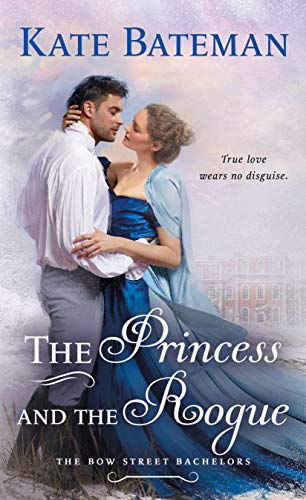 I’ve had such an enjoyable time with the Bow Street Bachelors series.  And finally, it’s Sebastien’s time for romance in The Princess and The Rogue – even though he would stubbornly deny the existence nor the need for love in his life.

Ana is a princess on the run from a forced marriage proposal by a dastardly villain who is suspected of spying against her homeland, Russia.  She has fled to London where she is hiding in plain sight as the companion to a lovely older woman – and a teacher of sorts to the ladies of a brothel, helping them to learn to read in order to provide a different life for themselves should they choose.  It’s the brothel part of her hidden identity that will bring Ana into contact with Seb and does he ever get the facts wrong from the start.

Ana’s past is about to catch up with her and the safest place to be is, well, in the gaming hell owned by Seb and his friends.  As Ana and Seb plot to catch a spy the sizzling attraction spark that first ignited between them steadily grows into something far more than attraction or lust.  Seb is still wrapping his mind around the fact that he can in fact love someone – and watching that realization overcome this stubborn man was a fun experience.

The Princess and The Rogue is a fast-paced, funny, sultry, purely enjoyable romance which (I believe) wraps up the Bow Street Bachelors series.  I had fun with Seb and Ana as they go after a spy and fall in love along the way.  If you love a good, engaging Historical Romance then you’ll want to pick up this story and this series.