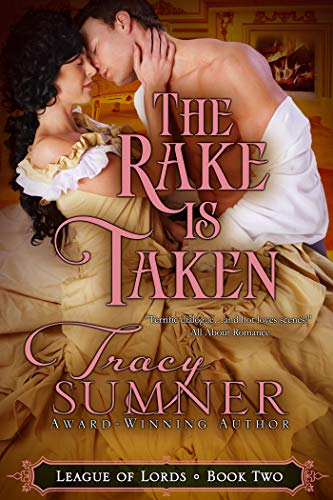 ‘The Rake is Taken‘ is the second title in the ‘League of Lords‘ series, and while some might say since it is a story completely about one couple this could be read as a stand-alone.  While I don’t disagree with that, I do wish I’d had the time to read the first story in the series before Victoria and Finn’s story for I would have had a better background and the couple from the first story do make an appearance.  So really, it becomes a matter of personal preference or funds whether you read this series in order or simply dive into a good story with not only a Historical Victorian Romance timeframe but most definitely Paranormal Romance involvement.

I really enjoyed ‘The Rake is Taken‘ for it not only has a very good story with intriguing but interesting characters it also enters into the paranormal world within a timeframe where anything like this would have been seen as witchcraft or the dark arts – and the people involved punished at the least, ostracized or killed at the most.  (Yes, I know, we always have been a civilized world, right?)

To be frank, I don’t feel I can go into any details beyond what you’ll find in the Cover Description for saying more could in fact spoil this story (and the series) for some readers.  Yet, it is a fascinating story of unique abilities, and finding just the one right person to accept, even begin to understand the uniqueness of the gift each has as a natural ability.  I adored Finn, he’s a devil-may-care type of man with a depth that few ever truly encounter.  Victoria held my heart captive for she’s been through a lot, her expectations of love aren’t the greatest which is why finding Finn, as exasperating as he can be, was pure magic for her.  I believe that anyone who loves a good Paranormal Romance will enjoy ‘The Rake is Taken‘ for at the heart, although set in Victorian England, this is mainly a Paranormal story, IMO.  Of course, Historical Romance readers will enjoy this one as a genre, but it’s not often I see a story with this depth tied to the paranormal and historical world so effortlessly.  And on that note, I’m not going to divulge any more.  I had a great time in this world and if these are your Romance genres then I’m betting you’d enjoy yourself as well… if they aren’t, then take a risk and indulge yourself – I think you’ll be glad you did.