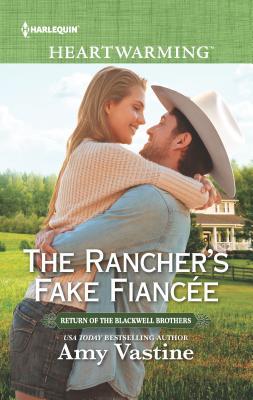 Two things for Tyler and Hadley to remember — the past isn’t always as set in stone as we remember, and if you’re going to lie about a relationship be certain you know who you’re lying to –  others… or yourself.

Tyler’s story is the fourth in the Return of the Blackwell Brothers multi-author series – and it’s as full of heartache as it is full of eventual joy.  Tyler has been carrying around a heavy burden like a cloak for years now.  The truth is that there was no need to ever pick up that burden, but he won’t believe that fact.  He’s always felt like the invisible brother, becoming lost among the other boys.  As an adult he’s determined to never set foot on the Blackwell ranch again.  But never is a long time, and finally something has enough impact to bring him home.  But he’s not returning alone, no he’s got a pretend bride-to-be on his arm and lies on his lips.  Tyler finds himself emotionally blindsided both by being back home and his reaction to Hadley.  What was supposed to be pretend is certainly starting to feel like forever ever after.  How the heck did that happen?

Hadley is not without an agenda of her own… beyond what Tyler thinks motivates her.  She wasn’t supposed to care about this stubborn, lonely and alone man.  That was definitely not part of the plan, yet seeing Tyler on his home turf, his interactions with his family she’s seeing a man she could hold onto forever… and that feeling is not pretend.

Now, how do they get out of the mess they made for themselves and start talking, sharing and admitting that this love is the forever kind.

The Rancher’s Fake Fiancee will pull you in and not let go until the final page.  There are major hurts here for both Tyler and Hadley.  Watching them acknowledge those feelings, come to terms with it and move beyond is a satisfying part of this romance.  There are tender moments, chuckles to be found, some precious times as well – but for the most part we have a couple who are learning how to let go of the past, discover a new reality and take a risk on a future they didn’t expect to find.  It’s an emotional journey, and a very satisfying one as well.

I am enjoying how each author takes a sibling, makes us love them, but understand the others as well from different viewpoints.  It’s one of the reasons I love multi-author series — because no two people see their world the exact same way.  I would not hesitate to recommend The Rancher’s Fake Fiancee to any reader no matter your favorite genre because Tyler and Hadley face many of the things we all must face, and find love among a very strong community called family.  I believe you’ll enjoy this one, I know I did.

*This review first appeared on my Lovin’ A Cowboy Romance blog.