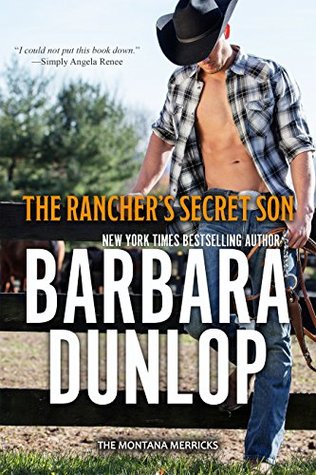 Well, this is, I believe, a first for me.  A Marietta, Montana connected book that I simply could not connect to… at all.  There were moments in The Rancher’s Secret Son where I thought I could but not enough.  And it pains me to say that because usually I love Barbara Dunlop’s stories.  The reason why is really quite simple.  Eli.  While I get finding out you have a son sixteen years after that fact is a shock I felt no sympathy for Eli after his behavior in the first chapter.  He comes off as an arrogant bully and I could never lose that first impression of him enough to care if he ever found a happy ending.

I’m calling this story a “good book” with a 3 star rating because there are parts that did make it an interesting story – the parts not including Eli on the page.  Yes, the man really did burn me that much.  I’ll continue the series, one book does not make or break a series for me, but this one just didn’t touch me.  There is an audience that will enjoy Eli and Piper’s story, so I would encourage you to make up your own mind.  After all, mine is just one reader’s reaction to a story.  Pick up The Rancher’s Secret Son and let the magic of Marietta, Montana help you decide how you feel about these characters.

And what is with the newest trend of renaming already published series and titles?  It makes it difficult to continue on with a series you’ve started somewhere down the line that  had a completely different name.  For example, the first story in this series has been re-titled to The Bull Rider’s Redemption – formerly known as Chase the second title in the American Extreme Bull Riders Tour.  There is no mention in the description on Amazon that this is a formerly published, re-titled book.  In my opinion, that’s not fair to the reader or the buyer who may have purchased the title under a different name.