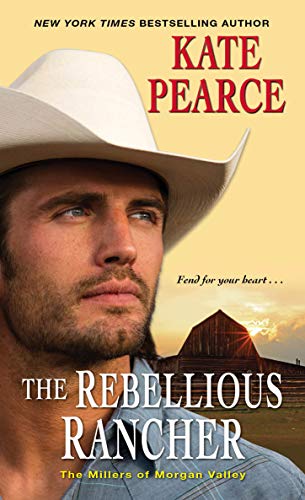 ‘The Rebellious Rancher‘ is the third title in ‘The Millers of Morgan Valley‘ series, and it kept me flipping pages from start to finish.

Ben, as the second son, didn’t get the ranch as he’d hoped.  No, that went to his older brother.  So, now Ben is trying to find his own place on a ranch that isn’t his to run – and most likely, he’ll end up heading out on his own one day.  But for now, he’s heading up a trail ride trip for one spoiled, entitled Hollywood actress who is certainly not accustomed to what she’s going to find on this trail ride, nor the attitude that Ben is about to bring into play.  For Ben, this is the chance to get away from the ranch and thoughts that he’d rather not face right now.  For Silver, this is supposed to be the chance to get ready for a part that she desperately wants in an upcoming movie.  She has no idea that her overbearing, overprotective, controlling parents are at the center of this experience… or that she’d return from this trip a much changed in attitude young woman.  Funny how some events have the exact opposite effect than was intended, isn’t it?

I could say that it took me a bit to warm up to Silver, but she was portrayed, early on, pretty much as I’d expected a spoiled, catered to actress would be when she has to do all those mundane things for herself and is cut off from social media and her phone.  What I did really enjoy about Silver was watching her change, become a different better person the longer she was away from parents, career, and social media.  In the end, I liked her and was definitely rooting for her to get that happy ever after she and Ben so deserved.

I adored Ben from the start.  I ‘got’ why he was so upset about the ranch, understood how much he loved it, and how now he’d be making different life choices.  Watching an angry cowboy deal with a pampered star brought out the giggles, and the eye rolls.  I had such a good time with the interactions between Silver and Ben – and loved watching them both grow from the people we first meet to a couple who will have to face a lot to be together but their resolve and love are strong enough for that.

We’ll run into some familiar faces, watch a couple grow individually and together as they face some very real dangers, and enjoy a romance that makes my heart smile.  If you love a good love story with an unlikely couple facing challenges then ‘The Rebellious Rancher‘ is perfect for you.