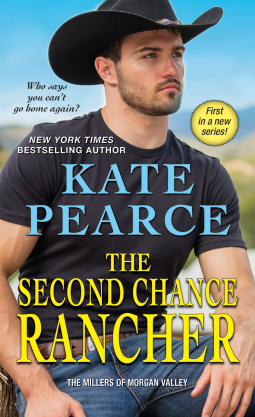 THE SECOND CHANCE RANCHER starts off with an ironic chuckle for me and simply kept building from that starting point.  While this series is a spin-off from the Morgan Ranch series it does stand on its own.  However, having said that we will see some cameo appearances of old friends, after all, they are neighbors and live in the same small town.  I adored the Morgan Ranch series and would recommend it not because it’s necessary to enjoy this series, but because it’s a darned good series.

Jackson returned home not because he was really ready but because his brother needed his help running the newly inherited ranch – and for some deeply personal reasons that Jackson isn’t ready to talk about just yet.  He has the persona of an outwardly happy-go-lucky kinda guy but there is an ocean of emotions beneath the surface that he hides quite well from most of the rest of the world.  That is about to change when he goes flower shopping for the woman he thinks he wants and discovers Daisy is back home and looking for some unusual help that will change both of their worlds.

I have to be careful now to not give away either Jackson’s or Daisy’s secrets because they are vital to the enjoyment of this story – and I don’t willingly do spoilers.  I was drawn to both characters but more to Jackson for at times it was difficult for me to really connect with Daisy.  I don’t know why but this became Jackson’s story for me.  Yet, I’m really looking forward to learning about Daisy’s brothers for they all sound like some – intriguing men.

THE SECOND CHANCE RANCHER will deliver some laugh out loud moments, some frustrations, perhaps a few misty eyes as secrets are revealed.  I enjoyed my time back in this world once again.  Daisy and Jackson’s romance sets up the rest of the series and provides a romance that shows that even when couples argue or disagree the emotions are still very much alive.  I’d call their story realistic for no person or couple is totally perfect but they do work as a loving partnership and that is what truly matters.