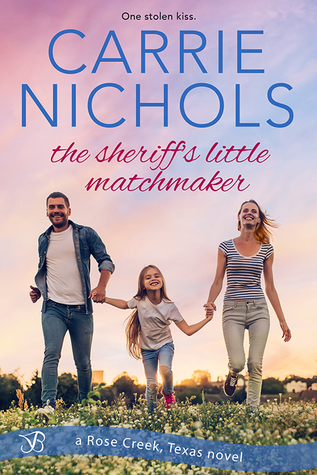 When teacher Sasha Honeycutt kisses a handsome cowboy in a bar on a dare, she never expects to see him again. To her surprise, though, he walks through the door of her classroom for a parent-teacher conference. Sheriff Remy Fontenot might be sexy as sin, but Sasha has no interest in falling for another police officer. Rose Creek, Texas is her fresh start after being “that poor widow.” Only, Remy’s precocious daughter has big plans for the two of them…

After their stolen kiss, Remy knows there’s a sexy woman hiding under that school marm charm. When fate—aka his seven-year-old—keeps putting her in his path, he decides to take it as a sign. His daughter needs a mom, and the intriguing, beautiful Sasha is perfect for the role. Not to mention their chemistry is off the charts. Unfortunately, he’s set his sights on the one woman in town who has no interest in falling for another man with a badge.

Titles in the Rose Creek, Texas series include:  The Sheriff’s Little Matchmaker –

One dare, far from home, will have lasting consequences for Remy and Sasha – the kind that could lead to a wonderful future, but only if Sasha can put aside her fears and take a risk on another man with a dangerous career.

The Sheriff’s Little Matchmaker easily drew me in to this first story in the Rose Creek, Texas series.  And one little girl with a plan, who stole every single scene she appears in totally captured my heart.  Remy is just simply delicious good guy to the core.  I got quite a few chuckles with his relationship with his daughter, Evie.  She has daddy wrapped around that pinky tight…. and she’s not above using those eyes on him either.  Evie is an old soul in a young girl, and I really hope that one day in the future we run into her again as she finds out that what she put her dad and teacher through is only the beginning of falling in love.

I really liked Sasha, she’s been through so much, yet at times she gave me conflicting feelings about her reasoning.  Yet to be fair, she is risking her heart once again in what she sees as a possible repeat of what she’s lost once before, so I got her hesitation… and it’s completely in character.  She, Remy and Evie make up a charming group of people who fit well together but it’s up to Sasha to be willing to take a chance on happiness.

The flair of New Orleans plays as much a part of this romance as the small town quirkiness of Rose Creek.  I enjoyed the blending of the two, and you’ll get that even more as you dive into The Sheriff’s Little Matchmaker.  I had fun with this story, the writing of Carrie Nichols is so smooth and easy going that I felt among friends from the start.  If you love watching two people get another chance at happiness, a small fry matchmaker and some swoon worthy moves then you’ll feel right at home with this first story in the Rose Creek, Texas series.  I plan to follow this series, and I’m betting that with one taste of this community, you will be doing the same.