The Ultimate Surrender by Elsa Winckler 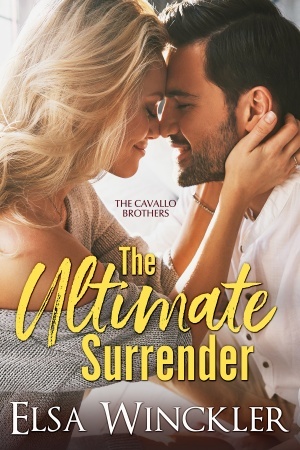 I’m frankly torn about THE ULTIMATE SURRENDER.  And while on my own blog this one gets a 3.5-star rating I will probably round that up to a 4-star rating on other posting sites.  Why?  I don’t believe the book’s (author’s) rating should suffer because I greatly disliked one of the main characters.

Elsa Winckler delivered a riveting romance with touches of angst, danger, family and second chances.  I enjoy her writing style and have loved the earlier books in this series.  My problem was Darryn.  He took the easy way out.  It’s that simple.  He made the choice to believe a lie without confronting Hannah.  And maybe I could stretch and say I understood it because of his previous experience, but it was a crappy move on his part and I expect better from the Hero, even when they’re momentarily acting like a jerk.  There are readers who will not see his actions this way, and that’s understandable as we all put our own interpretations on the written word.  But for me, I could never like Darryn or be concerned about his happy ending.

THE ULTIMATE SURRENDER is fast-paced, intense and will keep your attention throughout.  As I said, it’s still a good story even though I couldn’t like or love one character.

Change of Heart by Judith Keim

Change of Heart by Judith Keim